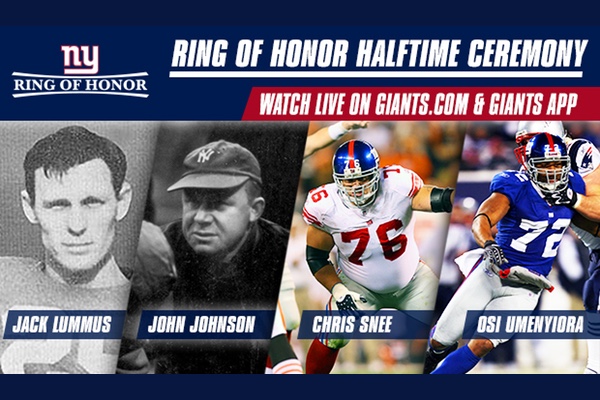 The Giants will induct Chris Snee, Osi Umenyiora, John Johnson, and Jack Lummus into the Ring Of Honor during Sunday’s game. The Giants started the Ring of Honor on October, 2010 It was believed that John Mara wanted to remember key Giants who helped the franchise achieve each of their championships. After Sunday night’s inductees the Giants Ring of Honor will have a total of 39 members.

“I took pride in being out there every game,” Snee said. “You only get so many opportunities to play games, so I am thankful. There were games where I probably was 70 percent, less than that, but I thought I owed it to the organization and to my teammates, coaches and the fans just to be out there. I’m getting paid to play that day, so I’m going to play.”

I finished my contract over there, and in my head I wanted to retire as a New York Giant,” Umenyiora said. “I wanted to play here, because I’d already done something else. Once I saw that that opportunity wasn’t really feasible, it just made sense for me to retire. I played the majority of my career here so for me it just made sense to be able to come back here to where I consider home and retire as a Giant.”

Johnson joined the team as an athletic trainer in 1948. He retired at age 90 following the 2007 season and Super Bowl XLII, ending a remarkable 60-year career with the franchise. According to Ronnie Barnes “He traveled with the team and was an indispensable member of the medical staff. He had so many stories about the early NFL and medicine before the arthroscope and advanced diagnostic technology.”

Jack Lummus’ entire Giants career consisted of nine games in 1941. He was a 6-3, 200-pound two-way end who that season caught one pass for five yards for a Giants team that finished 8-3 before losing to the Bears in the NFL Championship Game on Dec. 21, two weeks after the attack on Pearl Harbor.

On Jan. 30, 1942, with the United States fully engaged in World War II, Lummus gave up his football career to enlist in the Marine Corps Reserves. He was sent to the Mainside Recruit Training Center in San Diego for basic training. It was there, on March 16, 1942, that he wrote a letter to Jack Mara, the son of Giants founder Tim Mara and brother of Wellington Mara, informing the Giants he had joined the Marines.

Three years later – on March 8, 1945 – Lummus was mortally wounded on Iwo Jima when he stepped on a land mine and lost his legs. On Sunday, he will join Blozis as Giants players who gave their lives in World War II and are forever memorialized by the organization in the Ring of Honor.

All quotes and information provided by Giants.com