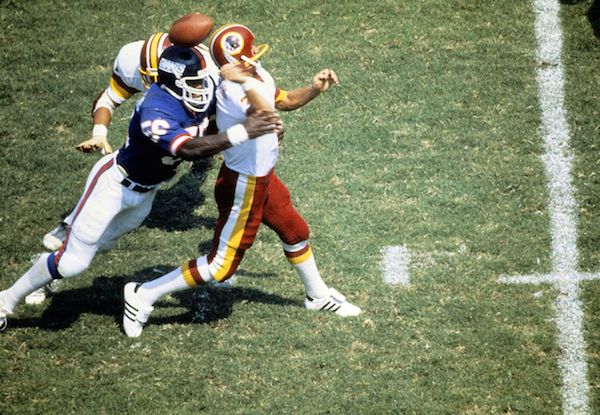 Tonight the New York Giants will play the Washington Redskins. Let’s get you pumped up for some Thursday Night Football. This weeks Throw Back Thursday #TBT is the LT hit on Joe Theisman.

I’ve never seen the play. People get hurt all the time in the game of football, it’s part of what we do. I’ve seen a lot worse hits on film. It’s funny because the very next morning after I broke his leg, I called him up. I guess his girlfriend or wife at the time answered the phone, and she was like ‘Joe, Joe, it’s that guy!’ Joe got on the phone and told me how I broke both bones in his leg, and I told him that’s because I don’t do anything half way. If I’m going to break them, I’m going to break them both. Said Taylor.

The Crushing hit would break Theismann’s tibia and fibula and end his career.

“I remember handing the ball to John, getting it back and then looking downfield,” Theismann said in a recent interview. “I couldn’t find Art Monk deep, and then I looked to my right for Donnie Warren. At that point, I was feeling some pressure, and the next thing I knew, I heard what sounded like a shotgun going off — Pow! Pow! — and felt this excruciating pain. Then I was on the ground.” Theismann said.

“Oh, God,” he said. “Wow. It just went so suddenly. It snapped like a breadstick. It sounded like two muzzled gunshots off my left shoulder. Pow, pow!” Then, he said, his endorphins kicked in and he felt no pain.