Where In The World Is Odell Beckham Jr? 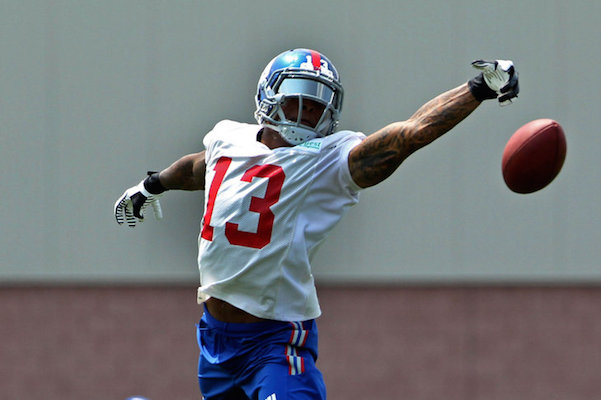 Where in the world is Odell Beckham Jr.?

Our beloved GMEN finally have some Mr. Momentum and are coming off the best performance we have seen around these parts in over a year.  We can use another shot in the arm on Thursday night when we head to the nations capital to take on the Redskins.  Our 1st round pick needs to play now…not later.

I remember growing up, playing all sports with pulled hamstrings, a pulled groin, bad ankles and a bad right shoulder….and I never missed a game.  Plus, I wasn’t getting paid millions.  Now, I do get it…if a guy is hurt a guy is hurt…but I also know when it’s your time to get in the game.

In the past as Giants fans we have seen players battle through injuries before…LT playing with a separated shoulder on MNF against the Saints stands out in my mind.  Shit, even Plaxico Burress played the 2007 season on one leg and still dominated that playoff run leading up to the Super Bowl.

Just two weeks ago we watched two Chicago Bears receivers go from not playing on Sunday morning, to being part of a huge comeback win for the Bears in San Francisco against the 49ers on Sunday night.  Odell, you are no Brandon Marshall or Alshon Jeffrey…but what makes them that much better than you is that they manned up and played the game.

I have a ongoing joke with my 10 year old daughter.  When she comes in crying that she got a bump or bruise or whatever…I ask her a simple question.  “Are you hurt, or are you injured?” — She will usually respond with… “I’m hurt Dad.”  Why is that her response? Because she knows the difference.

If your hurt you can play.  If your injured you gotta stay inside.

Well Odell…Are you hurt or are you injured?

If you can run wind sprints on the side of practice, then at this point, you should be practicing with the team.  Show a little heart…a little gumption….a little testicular fortitude.  We need you now…not in week 5.

“ODELL — GET YOUR SUIT ON, WE NEED YOU!!”  — We need your version of the Triple Lindy ASAP Odell —

So Odell…are you hurt or are you injured? Cause from what we are seeing from you so far, we are thinking that selecting Zack Martin with the 12th pick or trading back for Kelvin Benjamin might have been smarter moves…you got a lot to prove Odell and with every week that passes your time is running out.  Your move Beckham…just don’t pull nothing.

This offense is starting to come around…and adding a player like Beckham to what appears to be a blossoming offense will only make us that more explosive.

Beckham and his skill set are the perfect combination for what the Giants are trying to do on offense.  He runs great routes…has good hands and thrives making plays after the catch, but he can’t do that from the sideline.

This season has just begun.  The Giants play the first of six divisional match-ups this week and the misery we thought this season was going to be just days ago can be filled with promise buy 1130 Thursday night.

The road team is 0-3 in Thursday night games so far this season.  The home team in this scenario clearly has the advantage…but the Redskins defense was abused last week by quick WR’s — the Redskins, much like the Eagles can’t cover anyone.  Cruz looks like he’s back on his game.  Jennings is running hard…Randle is, well…Randle is trying to run the right route, anything else is gravy…or sauce if you’re Italian.

ODB may be the missing link.  He may be the one who can break this offense wide open.  The man already has a good rapport with Eli and maybe seeing his former LSU Tiger out there would provide Randle with some more motivation.

This season is just getting started….and on Thursday the Giants should take their new toy out for a spin for the nation to see first hand.

Where in the world is Odell Beckham Jr? — I don’t know now…but let’s just hope he shows up under the lights against the Skins this Thursday night.