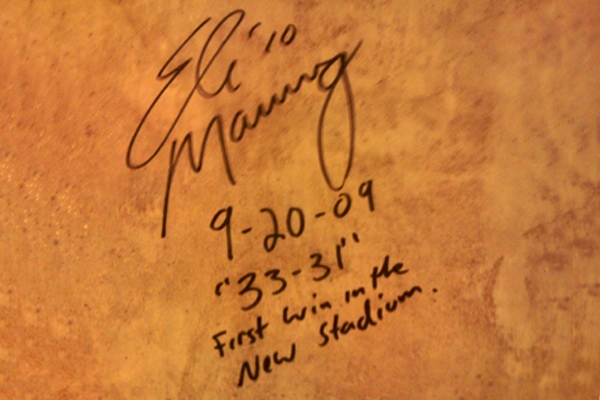 Eli Manning held an Reddit AMA ( Ask Me Anything ) this last week and was asked the following question.

Q: What’s something hilarious you have done or seen a teammate do to a visiting team locker room while on the road?
RealEliManning: After we beat the Cowboys in the opening game of their new stadium, I was requested to sign part of the locker room (which some of the Cowboys fans did not appreciate).

This Question and answer has fueled our #TBT (Throw Back Thursday)

It was September 20, 2009. Jerry Jones (Dallas Cowboys Owner) completed his dream stadium to the tune of 1.3 billion dollars. Opening day was vs. Big Blue. The game was close fought game that required overtime. Lawrence Tynes nails a 37-yard field goal as the clock expired. Giants stun the record-breaking crowd of 105,121 people.

Following the game Giants quarterback Eli Manning signed the wall of the visiting locker room, and wrote “’33–31′ First win in the new stadium” showing Such spunk.

“It was all me,” Manning admitted to Mike Garafolo of the Newark Star-Ledger Thursday. “Yeah, I’ve heard a few things about it. But they’ll eventually get over it.”

“It’s a pretty common thing. I was asked to sign it,” Manning said. “It wasn’t
like I just went there and signed it. I didn’t have a pen on me or
anything.”

The Dallas Cowboys denied Manning’s claim, and put more fuel on the fire!

“It wasn’t anybody from our organization that asked him,” said then Cowboy head coach Wade Phillips
said. “Things come back around in this league. I respect the
team we play. That’s the way I approach the game and I expect our
players to do the same thing.”

I miss that Eli. I hope he shows up this year!