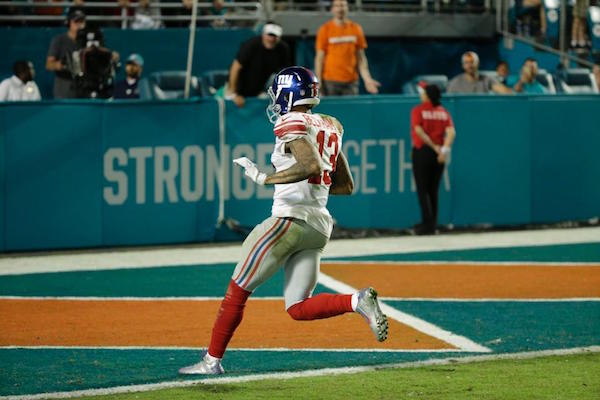 New York Giants fans got exactly what they asked for. The Giants stay alive with a 31-24 win over the Dolphins. This win keeps the  Giants in a three-way tie for the NFC East. Eli Manning in Odell Beckham Jr. Both brought their A games.

“We knew we needed a win, that was the mentality. All week, we just wanted to get that feeling back – that winning feeling back. We played so many close games, every one, and we had found a way to win.” Manning said.

Eli completed 27/31 for 337 yards a 4 TD’s getting majority of his receivers involved.

“Today, another close one, like always, But we made the plays in the fourth quarter. Hit the 80 yarder to Odell and then coming there in the last play of the game, the 3rd and 5, we had to make a play. We made the play, we converted on the third down.”

“Some other guys made some plays early on, We’ve got Reuben Randle in the mix, we’ve got Tye, we’ve got a couple guys going. And then, you know, finally kind of saw what they were playing. Adjusted some of the game plan, and got the routes to give Beckham the opportunity.”

Odell Beckham Jr. continues to tear through this league, with many throwing his name into the MVP race. Beckahm believes all games going forward should be treated as a playoff game.

“We all just stepped up tonight. We did a great job, Our offensive line, blocking. Rashad, running. Eli getting us in the right formations, the right play calls. Receivers are making plays and defense getting stops. I think we did a good job of connecting on all cylinders tonight.”

“Just knowing it’s a must win, it’s a playoff game for us, The rest of them are playoff games for us. You know, we’ve been on a losing streak of three games now and we needed to snap it.

More impressively, The Giants were able to hold onto a fourth-quarter lead and close the game out. Manning and company were able to string together key first down killing the clock.