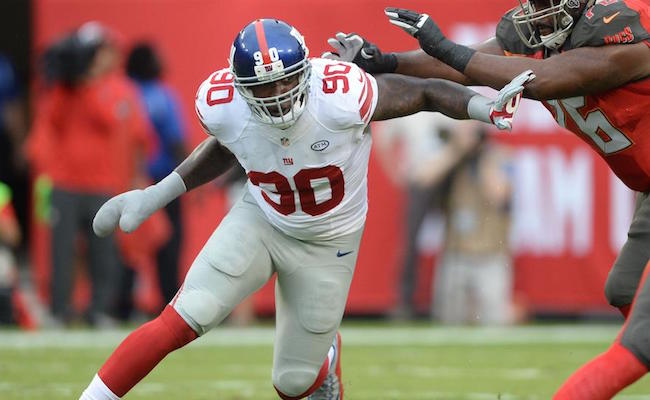 Giants inspired by JPP returned to form and with a 32-18 victory against the Tampa Bay Buccaneers. JPP played solid playing in 46 of 63 defensive snaps (73 percent). The numbers show he had two solo tackles, but this does not account for his pressure on Tampas’ quarterback Jameis Winston.

“We definitely made him uncomfortable, He is a good quarterback,  he can run, he can scramble. A couple times he got out (of the pocket) and scrambled on us, but we kept our composure and played some good football.” said Pierre-Paul

Coach Coughlin was happy to see JPP back on the field, and felt he was a critical addition to the struggling Giants defense.

“I think the players were excited to have him as a part of our team and have him active tonight, I think he made a couple of outstanding rushes, particularly at the end, when the quarterback was forced to roll right and heave the ball up.  That was critical at that time. We didn’t get a sack, but we did pressure. He needs to get his timing down, obviously.  He made a couple real good rushes coming up and under. So I think he is just going to get better and better.” said head coach Tom Coughlin

In one of Bucs last possession, they started on their own 20-yard line with 7:18 remaining. They ran eight plays and gained a total of 31 yards, Giants defenders with the hep of JPP pressure they were forced to punt.

With this win the Giants were able to keep their lead in the NFC East. Hopefully G PP can continue to strengthen this Giants defense and hope for a run into the playoffs. Eli Manning felt JPP was disruptive against the Tampa Bay Buccaneers and happy to see him out there.

“It was just fun seeing him out there chasing the quarterback,” quarterback Eli Manning said. “We wanted him to get a sack … I definitely saw him chasing the quarterback around, and getting him out of the pocket and making him move. So he was a presence and that’s just after two weeks of practicing. The more practice that he gets, getting back in the lineup, getting more game playing time, will help him, but he was definitely disruptive today and it was good to see that.”

Next week the Giants will play New England which will surely bring up memories of prior Super Bowls. Please leave a comment and feel free to share!