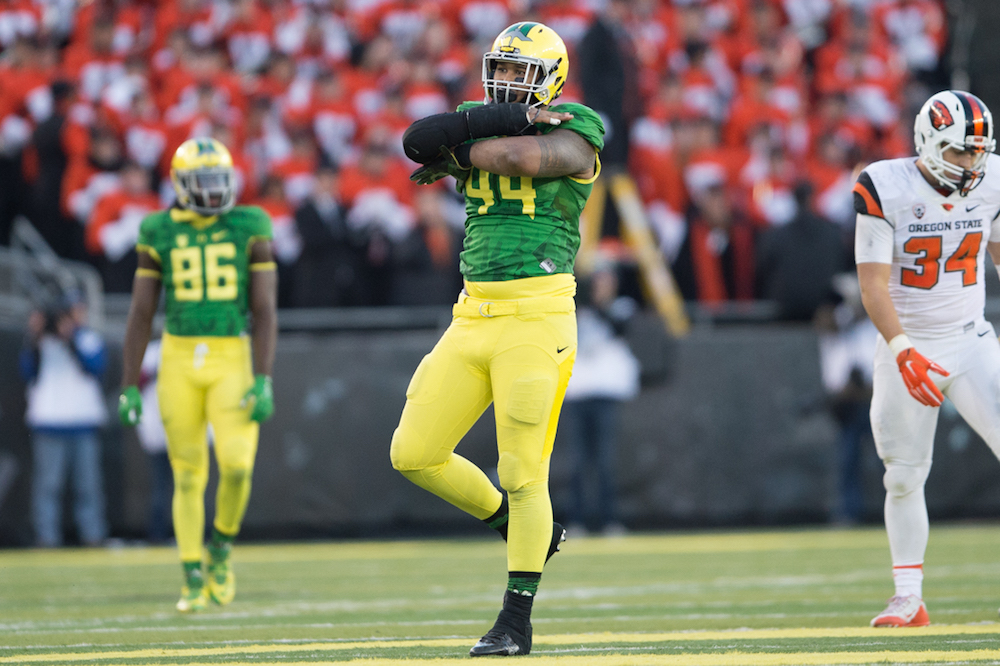 Hello Giants fans, and welcome to my first post. I thought it’d be a fun start to take a look ahead at the draft so let’s get to it!

The NFL Draft is now less than 3 months away. This is what I’d call a way too early mock draft due to the fact that there haven’t been any Pro Days yet and we are still weeks away from the NFL Combine. That being said, I do think it’d be fun to get an early look at my predictions for picks 1-12 for the 2016 NFL Draft.

Laremy Tunsil is a name you will see at the top of the board in almost every mock draft. The main thing that NFL scouts notice about Tunsil is his extraordinary balance. Balance is a key part in blocking with a 315 pound body. You will often see lineman on the ground seconds into the play, but a guy like Tunsil will give you the pass and run protection every team dreams of. The main criticism I can make about Tunsil is his off-the-field issues. Tunsil was charged with domestic assault against his stepfather. He also accepted benefits and was not cooperative with investigators, keeping Tunsil out for the first 7 games of the season due to a suspension. Overall, Tunsil is by far the best offensive lineman in the draft. Assuming the Titans select Tunsil, they will have the 11th overall pick out of the 2014 draft, Taylor Lewan, and the 1st overall pick out of the 2016 draft, Laremy Tunsil, playing tackle. This is not a duo that any defensive ends will look forward to playing against.

Carson Wentz, Paxton Lynch, and Jared Goff. These are the 3 quarterbacks that are likely to be taken in the first round. I would not be shocked for the Browns to select Wentz or Lynch with their second overall pick over Goff. However, I do believe that Jared Goff has the best pure arm talent out of the three QBs. While comparing Goff vs Lynch vs Went, Goff is best for his arm talent, Went is by far the most mobile QB rushing for 6 TDs this season, and Lynch is a combination of the two having good arm talent along with the ability to run the ball. The Browns will certainly select a QB with their pick due to the fact that their QB is Josh McCown who they have made clear is not their guy, and that they recently announced they will cut Johnny Manziel in the wake of his latest off-the-field issue of domestic violence.

To put it nicely, the Chargers offensive line wasn’t good this year. To put it honestly, the chargers offensive line was pathetic this year. Phillip Rivers was hit the 3rd most times out of all QBs in the league, and was the 12th most sacked QB in the league. There needs to be a change, and that change, is Ronnie Stanley. Ronnie Stanley is a step down from Laremy Tunsil. They are the exact same size, and are very similar players. Just like Tunsil, Stanley has great balance, but his greatest attribute is his quickness off of the line. Stanley is able to match up well against quick defensive ends which makes him such a special player. Expect to hear Stanley’s name called third in the draft assuming Laremy Tunsil has already been taken.

“NOOOOOOO!!!!!”- Giants fans everywhere after the Cowboys STEAL Joey Bosa at number 4. I loved watching Joey Bosa this season. He is an electrifying player who always finds a way to get to the QB. I actually had a hard time letting Bosa fall to 4 in this draft, and I wouldn’t be surprised one bit if the Titans take Bosa with their number 1 overall pick. Along with his extraordinary talent comes his size. Joey Bosa boasts a 6’6″ 276 pound frame, 1 inch and 20 pounds larger than the average defensive end. And even with his large size, he is able to get off the line quickly and is elusive at getting by offensive linemen. All I can say to Giants fans is Joey Bosa is not a guy you want Big Blue trying to block twice a year, and when the Cowboys are on the board, just hope that Jerry “old man” Jones makes another dumb decision in the draft and that they DO NOT end up with Joey Bosa.

Myles Jack. Myles Jack is one of those guys who make the game so exciting to watch. He has the ability to get right off of the line of scrimmage and get to the QB immediately with his incredible lateral quickness which continues to amaze NFL scouts. Myles Jack is exactly what the Giants need, a linebacker with the athleticism and quickness to get to the QB. This could allow the Giants to possibly move Devon Kennard to MLB if we are unable to get a MLB in free agency. If Myles Jack is able to fall to the Giants pick, which doesn’t seem that unlikely when looking at other NFL Mock Drafts, I would love to hear his name called and see him holding up a Giants jersey.

Here is another guy that you will see going to Big Blue in many other mock drafts. If you watched the College Football Playoffs, you would have seen and heard Lawson’s name tons of times as he was a star throughout all of his college career. He meets the average size of an NFL defensive end. He is a much better run stuffer than he is a pass rusher. Coaches also can see him transforming into a LB in the NFL which is something very rare that will appeal to whichever team selects him. All in all, Lawson does lack some athleticism but is definitely a guy I would be happy to see in a Giants uniform next season.

Cam Newton is my NFL comparison for Carson Wentz. Now, don’t take that the wrong way, by no means am I saying that Carson Wentz will be AS good as Cam, but he definitely shows flashes of Cam on the field. He is an incredibly mobile quarterback, finishing the year with 6 rushing touchdowns and 294 rushing yards in only 7 games!!! He was on track to finish the season with around 13 rushing touchdowns and 750 yards. That screams Cam Newton to me. Now, about the 49ers. They recently acquired ex-eagles head coach Chip Kelly who has been used to having a mobile quarterback, especially at Oregon. The main reason I think Chip Kelly didn’t get the job done in Philly is because they deprived him of a mobile quarterback, giving him Sam BADford. Another guy I could see the 49ers grabbing is wide receiver Laquon Treadwell, but like most people say, what’s the point of a great wide receiver if you don’t have anyone throwing to him, and yes, Colin Kaepernick/Blaine Gabbert is NO ONE.

Another guy who would put a big smile across my face if I could watch him in a Giants uniform, but that is probably not going to happen if the Dolphins have anything to say about it. Jalen Ramsey is definitely the highest rated defensive back in this years draft. The two main things I love about Ramsey is that he stands at 6’1″ making it easier for him to line up against larger receivers, and that he has played some safety throughout his career making him similar to The Honey Badger: Tyrann Mathieu. Great vertical leap, very athletic, lockdown corner. He allowed an outstandingly low completion rate of 38.5 percent. If Jalen Ramsey is able to fall to the Giants 10th overall pick, I would be in my glory hearing his name announced of the Giants!

Many of you will definitely disagree with me when I say this or comment “Defense!”, but Laquon Treadwell is the one offensive player in this draft that I would be happy with the Giants taking as their 10th overall pick. That being said, the chances of him being available at 10 are not very likely. Treadwell is a guy who will go up and get whatever is thrown his way. He is a pretty average sized wide receiver, but he would always come down with 50/50 balls during his time at Mississippi. Again, before you say that the Giants shouldn’t draft offensively, that’s what most of you said back in 2013, and now we have one of, if not the best playmaker in the league in Odell Beckham Jr.

This was a really, really tough choice for me deciding between Deforest Buckner and Vernon Hargreaves. The main reason I ended up choosing Buckner was his size. The Giants tend to like players who are bigger than the average size of their position. Buckner stands at a whopping 6’7″, three inches taller than the positional average. Buckner also weighs about 285 pounds, 30 pounds heavier than the positional average! This would usually be a bad thing for most defensive ends, but Buckner is able to use his size to his advantage due to his wonderful athletic ability. He is a very tough worker off the line, and will get to the QB, finishing last years season with 1o.5 sacks along with an impressive 83 total tackles. Although I do feel that Buckner will be the Giants 2016 1st round draft selection, I also want to note some guys I would love to see go to the Giants if Buckner does not: Joey Bosa, Myles Jack, Shaq Lawson, Jalen Ramsey, and Vernon Hargreaves. One guy whose name you will probably not hear in picks 1-12 due to his injury is Jaylon Smith. Jaylon Smith was the highest rated linebacker in the draft before his injury which will probably keep him out for at least a few games of the 2016 season which is the main reason I don’t think the Giants will take him. So to summarize it up, based on my draft predictions and who is already taken, I do think Deforest Buckner is the guy who will go to the giants, however, as I have listed, there are a few other players who I could and would love to see in a Giants uniform next year.

This is certainly a reach at the 11th overall pick, but the Bears showed in 2015 that they need help at LB, which Leonard Floyd would be sure to provide. Due to his extremely lean frame, Floyd would be limited to outside linebacker in the NFL which is a downside for most teams. Most teams just don’t want a guy that is limited to one linebacker position. That being said, this provides a rare specialty that Floyd could provide for many teams which would be covering a receiver when necessary. He played very well in man coverage in college, and with his lean frame could move very quickly and agile against a slot receiver when necessary. Floyd could also shift to safety when necessary, again, thanks to his lean and smaller frame. Chances are the Bears won’t reach this much for a guy who is usually seen being taken in the twenties in most mock drafts, but in my opinion, this would be the pick that would benefit the Bears most in 2016.

Last but certainly not least, Vernon Hargreaves. Hargreaves is a guy who again, I wouldn’t mind seeing in a Giants uniform. However, with the options that will probably be available at 10, Hargreaves most likely won’t be the best choice for Big Blue. Hargreaves meets the average height and weight for a cornerback, which would be another factor for the Giants not selecting him. The Giants tend to lean towards larger corners such as DRC (Dominique Rodgers-Cromartie). The saints desperately need a cornerback. Brandon Browner was by far the most penalized player in the league this past year, and the saints secondary overall was laughed about all season. Hargreaves would definitely provide a much-needed boost to the Saints’  secondary which could take some pressure off of the struggling Brandon Browner.