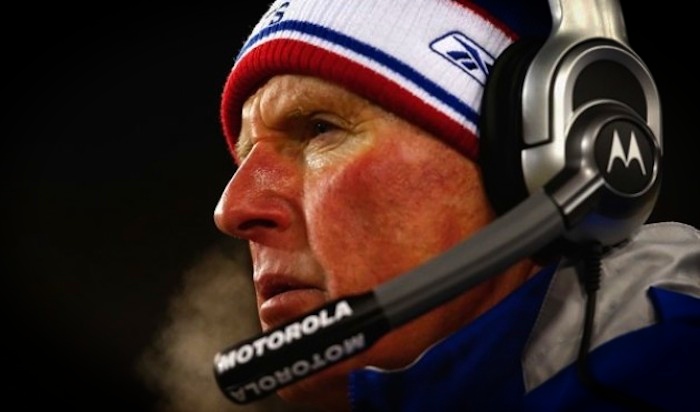 A.K.A. The Main Reason I’m Confident About This Season.

With all the gorgeous, talented, and built men that make up the National Football League, a girl has got a lot to drool over. I mean, even Mark Sanchez’s mediocre quarterbacking ability was momentarily excused when he posed in those white pants in GQ. As a lifetime Giants fan, though, there is one man that despite some flack he may get at times (like maybe after that awful season last year), has my heart like none other.

Tom Coughlin. This man wears his heart on his sleeve, and his emotions are so clearly read on his face (second only to the khaki donning Jim Harbaugh). This resilient dude’s passion for coaching, his love for his team and his job are the main reasons that after last season, are far sexier than any ripped dude in tight pants. Also, the reasons that I’m more geared up for this season than nearly any other. The combination of Coughlin’s passion, stern attitude towards his program, and his pride should inspire any Giants fan to have a positive outlook on the upcoming season. It’s no secret, 2013 was a straight up embarrassment. If there’s one thing Coughlin hates, it’s being embarrassed (just look at his face when a call isn’t overturned after he throws out a challenge flag– disappointment that is unparalleled). During one game this embarrassment is bad enough, but a whole season? With this man’s pride, the tight ship he runs, and his desire to not end his career without ending on a highly positive memorable note, Giants fans have a lot to look forward to this year.

And sure, one can look at his off-season behavior of completely revamping the team (like signing about a million free agents and making changes to offensive coaching staff) and take this as a hint that things are going to be different this year. Maybe it’s just the woman in me, but more than just news updates about how the program is changing this year and new player’s stats, the knowledge that Coughlin’s hugely emotional drive will result in his refusal to be unsuccessful even one more year is a huge reason for hope this upcoming season. Coughlin is going to make it possible for me to talk shit about football in bars with strangers again… and actually be able to back it up. And THAT is the sexiest thing that anyone involved in the NFL can do for their fans: show them that you get the hell back up after you get tackled.