Eli and the Defense vs. The Panthers 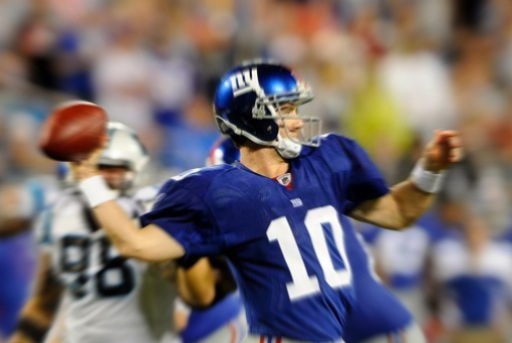 Eli Manning vs The Panthers

Let’s hope that nobody pulled a Turner and decided to get caught for a DUI today, because the G-Men need all hands on deck. It’s looking a little shady with at least four big names rocking the huge red O next to their names on the roster. It sounds even worse when you hear they are all starters on the offense. Hearing the news on ESPN was a great way to end my hangover ride on cloud nine after being at that game Sunday. Eli was looking like a rookie quarterback out there in the first half, nose bleed seats didn’t help but from the looks of it those passes weren’t tipped and couldn’t be pinned on anybody but Eli. Then in crunch time, when it mattered most, Eli decides to remember that he is a two-time Superbowl MVP and make it rain out there. There is nothing better than watching Victor Cruz Salsa City as a celebration for his grandmother’s life. Just thinking about the game is giving me chills; but we’re already at week 3 for the Giants after only three days of rest (Thanks Goodell). So let’s get at it Big Blue.
Cam Newton is coming in hot off an impressive win against the Saints, he was throwing the ball as well as he was running it. The Panthers have a solid rushing attack with a three-headed monster backfield of DeAngelo Wiliams, Jonathan Stewart (who is probable for today) and Mike Tolbert, not to mention Cam can run with the ball whenever he wants to. There is always that big play threat downfield with Steve Smith, we can only hope that with

Prince Amukamara returning that maybe the safeties can finally get something going. The Panthers D is nothing to write home about, of course they did seemingly shut down Drew Brees for a while last week, but they still managed to let up 27pts. This would be a team that the G-Men can get a running game started against since they are currently 24th in an early season ranking.
For the Giants, Eli needs to step up early and often. With Victor Cruz getting double teamed all night, he is gonna have to make The Pharoah and Randle look like superstars. I’m keeping my fingers crossed that nobody has figured out what to do against a Black Unicorn. If the G-Men can prove that their passing game hasn’t been crushed by the loss of Nicks and Hixon, then there is a chance that they can get their running game going. Brown looked like a man hungry for a spot in the starting line-up last week, just pure determination to get that game winning TD. We should all be looking for big things out of the guy, so that Bradshaw (when he’s healthy) isn’t expected to do everything with the ball. Now the Giants D… a complete disaster so far. Yeah they had a HUGE pick on Sunday and started to pressure Freeman in the second half, but let me tell you something. The stat line for the Octopus, Tuck and Osi does not represent a team who built two Superbowls on the pass rush. The secondary is miserable to watch, they might be better off throwing their gloves in the air to stop the ball because we know they aren’t blocking the passes with their hands. If the D steps up, the whole Giants team steps up.
Look, the Giants have been Road Warriors in the past two seasons they came home with the Lombardi Trophy. Some guys say the G-Men might be better off playing all their games on the road. Well let’s see if those guys are right, let’s have some domination tonight. A big score quick for the Giants will hopefully rattle the cage of a young QB. The last time the previous year’s Superbowl MVP and Rookie of the Year met on the field was in 2007, Vince Young against Peyton Manning. Big Blue fans are looking for Cam to make his inner Vince Young come out tonight.
Let’s Go Big Blue!