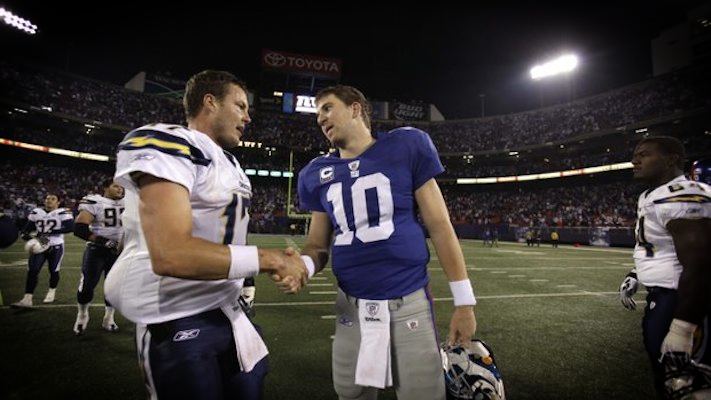 On April 24, 2004, the landscape of the NFL changed completely. Because of this famous draft, entire franchises changed their foundation. With the first pick, the San Diego Chargers selected Ole Miss product and younger brother of Peyton, Eli Manning. With the fourth pick in the draft, the New York Giants selected NC State product Phillip Rivers. Apparently disillusioned with the pick, Eli Manning was traded just minutes after being drafted. Giants GM Ernie Accorsi traded Rivers to the Chargers for Manning, as well as three picks (in which the Chargers drafted Kicker Nate Kaeding, Linebacker Shawne Merriman, and the other was traded to TB for Offensive Lineman Roman Oben). Ten years later, the glaring question still remains… Which team got the better end of the deal?

In terms of pure statistics, Manning’s completion percentage is lower, his passer rating is lower and he has thrown many more interceptions than Rivers. Rivers has been much more consistent throughout his career and had a significantly better season than Manning in 2013. But, we are not just judging statistics. As the great Vince Lombardi said, “winning is everything.”

Rivers is a good, maybe great, quarterback. Is it his fault that the Chargers have been nothing special the past few seasons? Probably not. However, his teams are 4-5 in the playoffs and that his passer rating dips from 95.6 to 79.2 in those nine games. In the playoffs, Manning has a record of 8-3, numerous fourth-quarter comebacks, the all-time record for most passing yards in a single postseason (1219 yards in 2011), a passer rating of 89, and, most notably, 2 Super Bowl MVP’s.

This is what separates Manning from Rivers. Manning’s knack for clutch plays allows him to thrive in big games, while Rivers crumbles under pressure. Rivers does have the edge numbers-wise during the regular season, but he does not have the postseason prowess or the championships that Manning has. It seems like Manning rises during the playoffs and Rivers sinks. Although the Chargers received other important pieces in the deal with the draft picks they acquired, it did not lead to rings. In a league where winning is everything, there is one stat that matters: since 2004 when these quarterbacks were drafted, the Giants have two Super Bowl victories, and the Chargers have none. Therefore, the Giants got the better end of the deal.