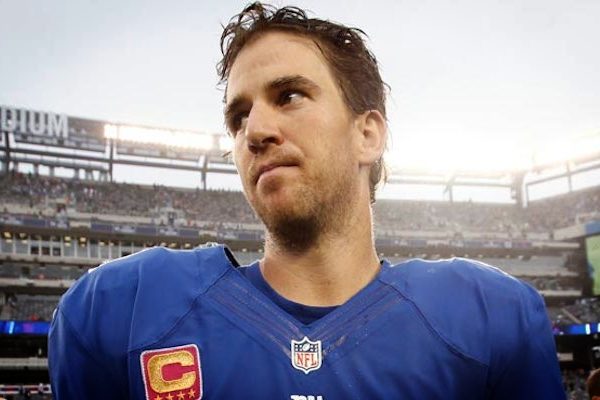 The NFL Draft is coming along with its annual hope and anticipation that it brings for every team and their fan base. But I don’t talk about any team as far as I am concerned I talk about THE team, The New York Giants. It was ten years ago where I was there to witness the New York Giants draft the best quarterback in team history, Eli Manning.

Now recently it has been reported that Eli is having surgery on his ankle and it goes to show that maybe one day he could be injured or maybe he won’t be the lifetime QB for the Giants. Should the Giants look for his eventual replacement or at least a plan B if the NFL’s active iron man does not continue the streak? Is Curits Painter the person you are confident in? (lol. Sorry I had to laugh at that one) Do you think they can develop Ryan Nassib? Or is that person not on the roster yet?

I ask you to not worry about what has not happened yet. We have no reason to believe that Eli will not be starting week 1 and every game next season. That assumption should be a big part of his legacy, which is what I want to explore/ celebrate because it is going on ten years of Eli, consistently showing up.

Eli Manning still to this day is as polarizing as he was back then when he was refusing to go to San Diego and seemed to just want to be a New York Giant from the start. He was not scared of the spotlight of New York and the scrutiny that he knows he would have to face. Eli has a quiet confidence, being a leader with his actions showing his teammates to not get too high or low with moments/mistakes on the field because focus and a full game’s effort is needed for a win, just follow him there.

Eli is the New York Giants all-time leader in all the passing stats that matter along with the major stat being Most Super bowl MVPs by a Giant. Along with the being the NFL’s active iron man at 162 starts and counting.

As great as all these accomplishments are, still Eli is not respected in the league like he should be (granted it is hard to make this argument after last year, it was just a bad year overall for the whole team). Eli was drafted with a solid QB class when 4 were taken in the first round (Phillip Rivers, Ben Roethlisberger, J. P. Losman) and 3 are still in the league with Pro Bowl appearances while 2 have multiple Super Bowl wins (Eli, Ben) and Eli is the only one that has a Super Bowl MVP actually 2.

Even with this obvious evidence, what QB is better when you watch shows on any sports network such as ESPN it seems like the consensus is that Rivers and Roethlisberger are head and shoulders better. Now I admit with Big Ben there should be a comparison that is close but Eli has not had the off field baggage that Ben has had and lets be honest Ben was horrible in his first Super Bowl win.

Phillip Rivers was technically drafted by the Giants but was immediately traded to the Chargers for Eli (Giants also gave up the draft picks that ended up being Shawne Merriman and Nate Kaeding) and I would still take that trade all day since it meant 2 Super Bowl wins and counting for the Giants. Now this comparison is the one that frustrates me because I do not understand how Rivers always seems to get the edge over Eli when critics are talking even though there is nothing that backs that stance up other than some stats but stats can be manipulated. So I will try to state my argument.

They say Rivers is more accurate from stats I have seen its like 63 percent to Eli’s 58. Is that a huge difference and lets be honest how many of Rivers throws were to Tomilson, Sproles, and Gates over the years. If most of his throws were to those guys how long was he actually throwing the ball down the field? Eli takes chances we know that so his percentage will be lower and he passes mainly go to WRs that are down the field. I will use this poker analogy you can’t win what you don’t put in the middle.

Eli pushes everything into the middle sometimes it pays off 2 Super bowls and sometimes it doesn’t but he is trying. Rivers 0 Super bowl appearances and how many times were the Chargers the favorites to comes out of the AFC or at least in the top 3 since Rivers has been there. When the Giants won the Super bowls were they even favored to win the NFC East?

Edge: Eli (I don’t care what the stats say I am using the eye test)

This argument just gets me mad so I cut it short but any Rivers fans you are welcome to find me and debate me on twitter.

The point of this article is this, we as New York Giants Fans are lucky, Eli is our QB. Whether he is frustrating you by throwing an INT or he orchestrating another 4th quarter comeback, you know he will be playing and trying his best to win the game. That is all we can ask from him because I can careless about his stats there is only one thing that matters, who is getting the W.

Are there better QB’s in the league, of course there is, I can’t really argue that point. But Eli wanted to be a QB for the New York Giants from the start and hopefully all the way to the end. In that time span I know what I get from Eli (risk taker, winner, and will always show up), and I know what I won’t get (off field issues, me first player, and taking off plays).

This season seems to be shaping up for Eli to show the critics why he was the 1 overall pick ten years ago and that day ten years ago will be celebrated by me because I am not looking forward to the day that Eli stops showing up.