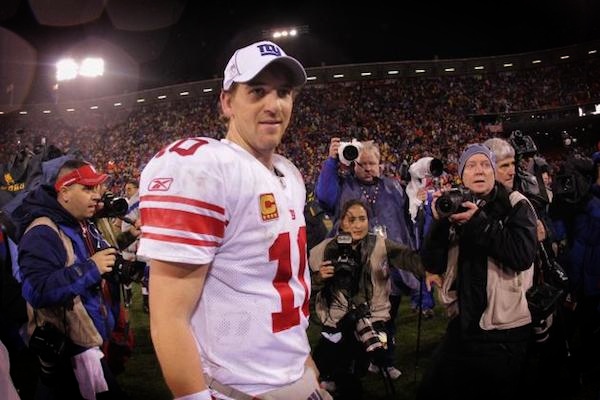 Giants fans, I hope you are excited the season is almost here. I know I am excited for this season but I am excited for this season for a different reason. All I have been hearing recently is how bad the Giants are going to be and they should expect a 6 win season at best. Well after I got irritated with the commentators who obviously root for rivals such as Skip Bayless (Cowboys fan), I thought this is where we want to be.

If you have been a Giants fan for any kind of time you know the Giants do not like to win when they are supposed to but when they have no expectations they like to prove people wrong, they are best when they are the UNDERDOG.

As Giants fans, we know for the most part we do not have a controversial team, they are professional and just do what they are supposed to do. (BORING) So Giants don’t get pumped up by ESPN or other sports networks because Eli is not giving the middle finger to other teams or our NY team has all the players show up for games.

The Giants don’t have expectations but we do have positives that we all can look forward to this season.

1. Overhauled secondary. On paper, this is one of the best groups in recent memory and they will just get better with experience with one another. DRC, Walter Thurmond and Prince Amukamara, we have 3 legitimate number one corners with solid depth behind them.
2. Linebacker corp with talent. We all know Jon Beason is solid and gave the Giants a huge boost after the trade last year. He will supposedly be back by week 1 so the middle is covered. Jamal Mcclain is a proven player and can play multiple positions. Jacquian Williams is one the best linebackers in coverage in the league and he has made strides to have a more, well-balanced game. Devon Kennard has been a pleasant surprise showing the intelligence to be a versatile player along multiple positions in the linebacker corp in his rookie season.
3. Defensive Front with a good mix of talent and experience. Prediction: Damonte Moore will have a breakout season and be the next great Giant DE. JPP, I am holding out hope that he will be get back in to form or there is a chance that this will be his last year being a Giant. Jonathon Hankins will fill-in nicely for the departed Livel Joseph and maybe even an upgrade. (especially if Livel supposedly played last year with an injury) Cullen Jenkins is a solid player and consistent. There is also depth with Ayers, Kiawanuka (who might be starting at the beginning of the season) Patterson, Kuhn, Bromley.
4. This Defense is just getting used to each other. Now we all know how many new people are on the team so this Defense is just scratching the surface of their potential.
5. We have Eli. Eli is still in his prime, he is still a two-time Super Bowl MVP and winner. Enough said. (Relax people the preseason is the just that, it doesn’t count. You have to work through the problems in a new system).
6. The running game is going back to old school Giants football. I grew up with the Giants running the ball with the occasional pass and they just pounded teams into submission. (Are we going to get to that point, probably not) But Rashad Jennings and Andre Williams are going to carry this offense this season. (I am just fine with that)
7. We have talent in the receiving corp. Cruz is proven. Randle has shown glimpses and hopefully he is taking that next step forward. Beckham will eventually play (that’s all I can say about him right now). We have Corey Washington, all he does is score touchdowns and he is our only big receiver. But there is talent across the board and it will be used but it will be playing off our running game unlike last year where Giants had no running game, which will make it better.

Now for my two Major questions going into this season:

1. Offensive Line: Now this group has not been together long at all and they are learning but I think we are going in the right direction. They are definitely run blocking well and I have seen times where the passing blocking wasn’t horrible. (granted that doesn’t happen enough to my satisfaction, YET)
2. Tight end position. All I can say is I hope they can block when they are supposed to and the few times that they will get passes just try to catch the damn ball. (Obviously you can tell I am not impressed)

My 10 predictions for this season:

1. 10 win season
2. NFC East Champs
3. They will lead the League in Interceptions
4. Eli will have 10 or less interceptions this season
5. Damonte Moore leads the team in sacks (which could be a bad thing for JPP)
6. Rueben Randle leads the team in all receiving categories
7. Jon Beason will be a Pro Bowler
8. Weston Richburg will keep the starting LG position even if Schwartz comes back
9. The Giants will be in the Top 5 in the league in rushing
10. Odell Beckman will play sometime this season (wishful thinking)

Now, I am a Giants fan and I love that no one believes in our team because when we win, it makes it that much better. Lets prove the Haters wrong.

Any Interest In Richie Incognito