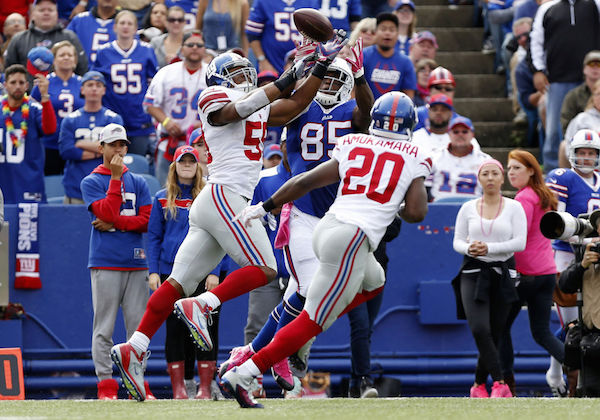 The Giants came away with a key victory against The Buffalo Bills at Ralph Wilson Stadium 24-10. The Giants now stand at 2-2 and are in a three way tie for the NFC East.

We knew it was going to be a tough game. They’re a good team. They played very well. They’re the number one rushing team in the league. We knew all those things. We knew it was going to be a battle, and it was a battle. I thought the offense did a great job in the first half. I thought the defense did a great job throughout the game. We didn’t get the big break on field position today, but we hung in there and we did our job on special teams as well – we eventually covered well. Our punter did an outstanding job. Our kicker came back on that last kickoff and kicked it out of the end zone, so I was pleased with that. The atmosphere out there; the environment was super. I thought it was an electric environment prior to the game. It was an exciting time, a great place to be and I was just thankful to win

The Giants were fueled by an amazing goal line stance that finally shifted momentum their way. Head coach Tom Coughlin saw that as a tremendous series.

No question there because there was plenty of time. There was time left to do whatever they needed to do. I wasn’t pleased with us not getting a first down, but when you’re back against the wall, you’re careful about what you do there. There’s no question about it, it was a tremendous series right there.

Coughlin Looking at the NFC East standings knows the Giants are right in the mix now.

It’s wide open. It’s still too early to say anybody is the favorite, which is a good thing. You start off 0-2, it’s tough to stay in the race, especially when you lose a divisional game, but we’re just excited to win this game and now all the focus is on the 49ers.

This past win was probably one of our biggest in the past two years, but now we welcome San Francisco to MetLife Stadium.