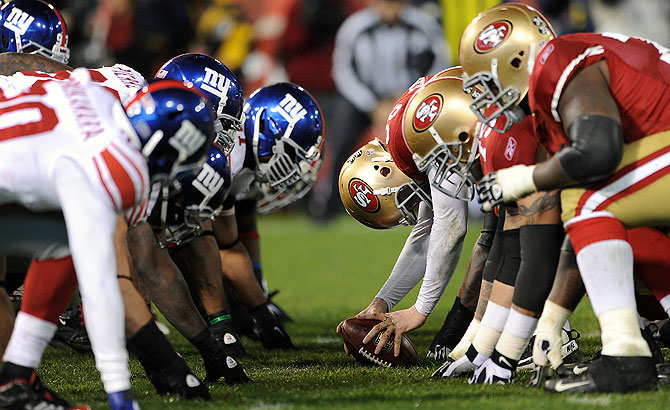 Another day in the season, another huge matchup for the Gmen. The Giants are coming in hot off 41-28 win that started off with me cursing my brains out and having flashbacks of the Redskins games last season. The Browns game began as an all too familiar “Giants are supposed to blow these guys out of the water” game in which the

team just doesn’t seem to show up and already had their bags packed for San Fran. Well then they got punch in the mouth repeatedly by a dominating back named Trent Richardson. People don’t understand how much I wanted to see thirty teams stroke out in the draft so somehow the Giants could pick him up. A Bradshaw/Richardson/Wilson combo would be reminiscent of the Earth, Wind and Fire from days long ago. Well Eli, ended up putting on his ELIte pants and Bradshaw said just give me the ball and watch me try to kill people. Because the game shifted from down 14-0 to tied 17-17 almost instantaneously. Giants poured it on in the second half and didn’t look back.
Now that is not something that can happen against the 49ers. The Giants get behind

that much that quickly you will just start to see Frank Gore and the leagues #1 rushing team just pounding the ball and eating clock. Alex Smith has definitely been proving that he’s no slouch in the QB position, but having guys like Gore and Vernon Davis will definitely help your situation. The San Fran D is most certainly a punishing one, they get to the QB fast and often. Nobody wants a repeat of the NFC game last year (except for the final outcome) with Eli pulling chunks of turf off his mask every other down. With Patrick Willis roaming around the Niners’ D the Big Blue line and all the TE’s and RB’s better keep their heads on a swivel to throw a couple bumps out there before peeling off on a route.
The Giants are coming off one of their best offensive games of the season. They are averaging about 430 yards of offense a game and they put 243 on the ground against the Browns. Victor Cruz was Salsa City dancing all over the place and The Black Unicorn showed how a man plays, getting back into the game after what looked like something that should end a human’s season. The key to this game is gonna be turnovers. It was the key to both of last seasons games, especially the NFC Championship (Thanks Kyle Williams). If Eli and whoever is catches or running with the ball can keep it in the Giants’ possession and not give San Fran any extra chances then with that alone they Giants have a good chance of winning this game. What I’m gonna say next is basically the phrase of the season, the defense needs to step up. I know there have been a ton of injuries in the secondary, but with our front four the secondary shouldn’t even be an option for opposing QBs. The Octopus, Osi and Tuck combo has a total of 3.5 sacks with Tuck dropping a huge goose egg in that stat line. Gore is gonna try and push these guys around and he might be successful, the battle in the trenches is gonna prove who wins this game, #1 Rushing offense vs #7 Rushing defense. Let’s get at em boys.
Two final notes: Nicks and Bardem are suited up for the trip, big receivers who will hopefully have a big day. If Brandon Jacobs or Manningham get the ball I hope someone drives their helmet through their chest.
Go Big Blue!