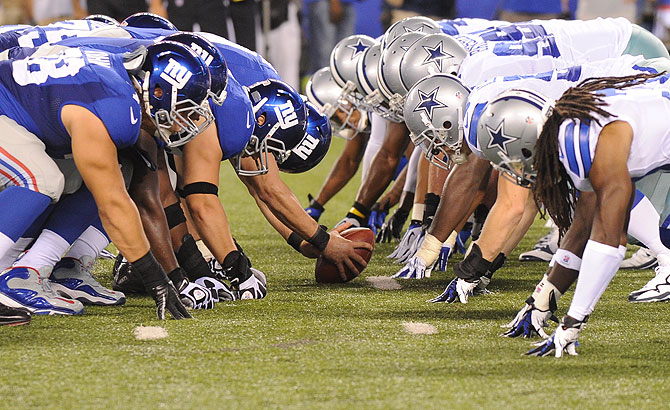 The Giants face another must win, according to all the sportscasters and analysts. This is just another test for the Giants; can they pull through in Dallas, on the road, against a division rival when it matters most. It’s not new for Giants fans that every game is a must win. The Giants are a New York team, was about to say play in New York which would’ve been a big mistake, and as with all NY teams they are expected to win week in and week out (Except for the Mets and Jets). The GMEN were decent last week in just another must win against the Skins; in which they won the all important turnover battle, a major aspect to their past couple games. The Big Blue D was extremely weak against the rush in the first half; it was miserable to watch the trickeration type run game of Morris and RGIII. As it always seems to go though, everyone turned it on in the crunch time when the Giants needed scores and stops the worst. The bomb to Cruz from Eli was one of the sweetest play-by-plays I’ve ever heard (Didn’t see it because of a wedding: Congrats Deb and Brian). Eli was captain clutch once again and saved the GMEN from an 0-3 start in the NFC East. Let’s hope they can get out a little faster against the Girls tomorrow.

The Cowboys have been struggling this season. Romo accounts for 11 of their 13 turnovers with 9 picks and 2 fumbles. That is something that

will happen to a mobile QB who doesn’t have the speed to really get out there and find a receiver. That should be taken with a grain of salt though because Big Blue seems to have been playing down to the Cowboys level and have let up almost an average of 3

TDs and 300 Yds a game to Romo. Probably the worst part of Romo’s game, from a Giants fan’s perspective, is that he has some uncanny ability to make tacklers miss. There have been plenty of times when he has been in the hands of Osi, Tuck or JPP and he just spins out of it. A bonus to the Big Blue defense, though, is that DeMarco Murray is hurt and won’t be back for a decent amount of time. Felix Jones hasn’t proved to be as punishing as Murray or Marion the Barbarian, when he was in town. This will let the Giants focus more on a nice little package of big receivers in Bryant, Ogletree and Miles; each one at least 6’1”. Ogletree BURNED the defense in the season opener, making them look like a bunch of rookies or the B squad. Witten is in full strength now, season opener was recovering from a busted spleen, and he is an easy go to for Romo since he presents a huge target, runs precise routes and has good hands. The Girls are gonna be facing a strong NYG team this week, almost at full strength, and I don’t think they are gonna be ready.

Standing in the Big Blue corner at 6’4” and weighing in at 218 lbs, the Giants’ offensive captain and two time Superbowl MVP… ELI MANNING! The dude just knows how to turn it on when the game is on the line, even though it shouldn’t have been since those 2 picks were the worst throws I have ever seen. Eli is being backed up by a man possessed in Ahmad Bradshaw, who has been bringing a spark to this team that reminds me of when Jacobs was in his prime. The only problem I have with him is that he almost gave Cruz a concussion with that slap; I have almost no problem with the “argument” he got in with Coughlin. The guy, who in two previous games rushed for over 300 yds, wanted the ball like any self-respecting football player. It was a complete non-issue that the New York media wants to trump up because the media whore that is the Jets franchise has given them nothing to work with. The Giants handled everything with class like they always do. Even though he didn’t rush for 100 yards he still had 43 and a TD with a hurting foot. It is still bothering him, but the Cowboys just lost a big key in their defense with Sean Lee (77 tackles) who is done for the season; so let’s hope that Bradshaw can run hard up the middle and make their back up miss. Cruz was Salsa City-ing all over the place last week after that go ahead BOMB from Eli, another big game from a big part of the offense. Chris Canty came back to the D-Line and he will begin to prove himself as a valuable piece of the puzzle that has been missing. The O-line gave up their first sack in three games, which isn’t that big of a deal. They have been playing their asses off and keeping Eli out of the dirt while opening up some big holes. The Giants need to click early, stop a terrible first quarter team in the Cowboys (14 pts in the first quarter so far), come out to a big lead at half time and give Eli a break with those fourth quarter comebacks.

I’m excited to see the Giants’ injury report and how few names are on it, would love to not see any names on it though. It would be great if this is a sign that everyone is getting healthy and we can be rolling into that buy week with energy and a big lead in the NFC East.