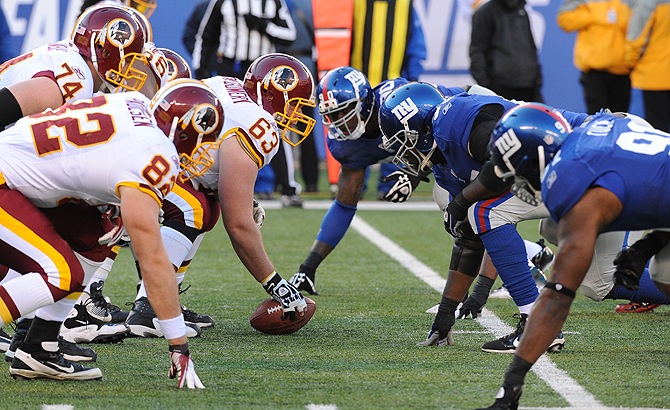 Now that is what I’m talking about. Last week was an all-around effort from Big Blue to put points on the board and keep the Niners off it. The team and the fans did not have to put all of their chips in on hoping for a last minute drive from Eli to put the G-men in front. Everyone was firing on all cylinders: the pass rush was there, the rushing game was still there and the secondary just came alive. Antrel Rolle getting NFC Defensive Player of the Week and Bradshaw dropping another 100+ yards rushing (sounded like it was the first time ever someone has done that at the Stick) were our biggest players; but, it didn’t even seem like they stood out with how great everyone was playing. Eli, throwing for under 200 yards for the first time in 13 games, didn’t seem to be too on point, but he also didn’t have much to work with because he started in San Fran territory most of the time. I will say that it was tough to watch two drives, starting at first and goal, end up with field goals. Those extra points will prove to be important in other games where our D isn’t as dominant.

Now up for the Wrecking Crew are the Redskins with rookie sensation RG3 at the helm. A lot of people are saying the Giants should be prepared for this challenge because they have been facing Mike Vick twice a season for the past couple of years. RG3 is a younger, faster, and more accurate passer than the Vick that the Giants have seen though. The Skins are miles beyond what they were last year, everyone would schedule them as an easy W and now they are proving that to be the wrong choice. The Giants overlooked them twice last season and made what should have been an easy walk into the playoffs, a difficult road with four must win games in a row. RG3 both threw and ran for well over a hundred yards last week. If the Giants secondary can keep his passing shut down like they did with Alex Smith and force him out of the pocket, then they can be in for a similar game like the Panthers earlier this season. The Skins deep threat of Pierre Garcon is out for this Sunday, which is definitely nice, but they still have Santana Moss who definitely is no slouch. The Skins have a decent pass rush with their D line, but if the Giants O line can stay on par with what they did last week there are not many guys who are gonna put Eli into the dirt. I believe that the entire Redskins day relies on how their Rookie QB is doing and that is gonna be the main aspect of the Giants’ D.

For the Giants, Bradshaw is starting to feel his career highs in rushing attempts and yardage gained. He has absolutely turned on the beast mode and been a catalyst to jumpstarting the offense early and often. Eli stayed off his back on Sunday and was very efficient with what he was offered. Although he didn’t put it in the endzone as often as he should have, he didn’t turn over the ball either. The team that wins the turnover game has the best chance at winning the entire game. The D understands that and Eli is getting the picture. With three picks last week, the secondary was rolling, even Prince Amukamura got into the mix with one. Nicks is still listed as probable, trying to overcome his knee issues and nagging foot problems, but he is on his way to coming back to full health and that will bring the most dominant WR tag team back together. With how well the Giants played as a team last week, it’s tough to say what need to happen this week that would be an improvement. Hopefully Chris Canty suits up because then the D line will be back to full strength. Giants just need to rush and contain RG3, get him fluster and get him to make mistakes.

With the Giants trouncing the Niners they are finally making believers out of the rest of the league. We just need to make our division rivals into believers too. 0-3 in the NFC would be a danger zone whole to be in; let’s not even make that an option.