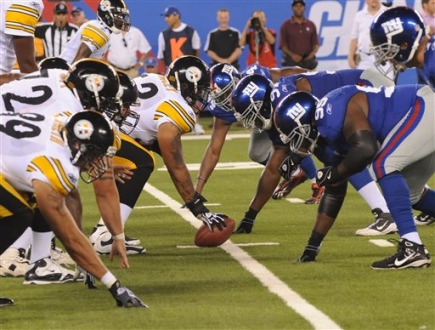 The Battle of the 2004 Draft
Eli and the Giants are going up against Big Ben and the Steelers today. This is gonna be a gritty, hard-nose, tough fight. The Giants are looking to come off a huge win in Dallas, making them 6-2 and evening them up in the NFC East, while the Steelers are coming off a convincing win against the Skins making them 4-3. The Steelers are in a hunt to make a playoff run in the second half of the season, while the Giants are trying to go into their Bye week at 8-2. Big Blue had an awesome first half against the Cowgirls last week, going up 23-0. Then it all came crashing down with Romo leading his team to 24 unanswered points. Nobody last Sunday looked as sharp as a playoff hopeful team should be. The Defense decided that they did not need to exist in the second and third quarters, while Eli and the offense couldn’t move the ball anywhere and get points on the board to try and shift the momentum. I guess I shouldn’t say nobody was on their game, because Lawrence Tyne was focusing on his inner Pélé and just booting the ball through the uprights whenever he was called on. If the Giants keep letting teams back into the game, or keep letting the game be decided in the final seconds, they are gonna be setting themselves up for disappointment. Let’s hope that doesn’t happen.
The Steelers have been quite the hit or miss team this season. They’ve had some disappointing losses and some great wins, namely against the Eagles and Skins. Injuries have been a major factor to this season’s Steelers: Polamalu, Dwyer, Mendenhall, Ryan Clark for some games and James Harrison for some games. Big Ben is a great mobile quarterback who is also a pain in the ass to tackle, but the Giants have faced their fair share of mobile QBs (Vick, Romo, Cam and RG3). The running back situation has also been a nightmare for Pittsburgh with injuries to all three of their backs. This afternoon Isaac Redman will be starting and that could prove to be a blessing for the GMen because Dwyer was coming off two 100 yard games and Redman has been averaging

2.5 yards per carry. The Pitt D isn’t the force that they once were. They are definitely still a team that cannot be taken lightly, but with injuries and age they are becoming more vulnerable than in the past.
The Giants need to be able to step on a team’s throat. The past three games have been terrible to watch because they all should have been blowouts in favor of the GMen. They haven’t been able to close in the redzone when they’ve gotten the ball in short yardage situations. They have been trading turnovers with teams so that it doesn’t even matter when they pick someone off. That Dallas game was probably the best proof to my point so far this season. Giants force six turnovers, including a pick six, and only got 13 points off them. It’s disheartening to the D when they make such awesome plays and then don’t get anything significant off it. Eli is bound to have a huge game especially with Nicks being 100% and presenting a full threat making teams spread out their coverage. Giants need to stick with an even distribution between the run and pass as they have been doing. There’s not much more they can do except clean up the plays and make everything just that much better. As always… Tuck, JPP, and Osi need sacks, need to pressure the QB and need to do what this All-Pro line is supposed to do.
Let’s Go GIANTS!!