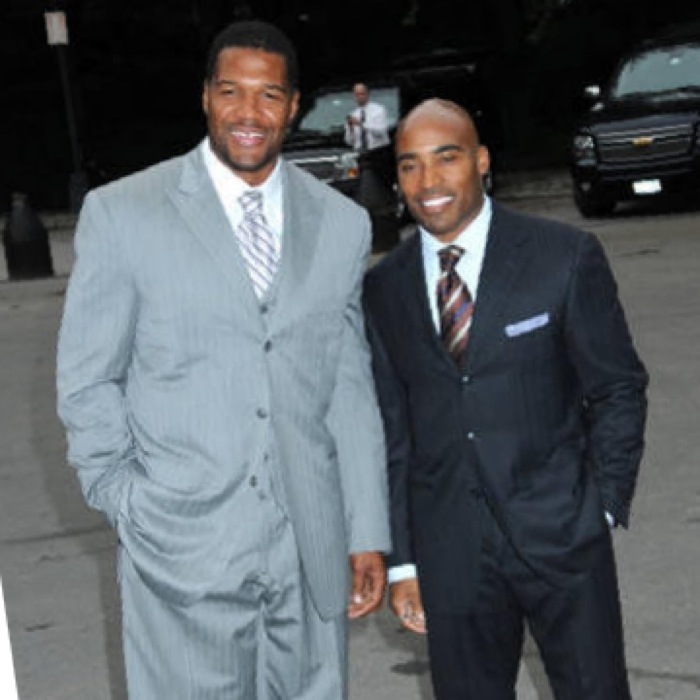 If Michael Strahan Wasn’t Such A Nice Guy You Would Think He Is Doing This To Tiki Barber On Purpose. So what has happened to Tiki Barber since he began trashing his team, soon to be former team, during a building year with a future franchise quarterback? He was quick to leave the Giants, citing differences with their game plan that was created by a coach who nobody seemed to get along with. He then got a spot as a broadcaster on Sundays, where he continued to trash the team who made him who he was. Then he started talking, started running his mouth about how Eli wasn’t elite and couldn’t handle the pressure and hit the targets. Tiki, why? I loved you man; that season where you came back with a whole new game plan to end your fumbling woes was so memorable. You provided the offense when Eli was learning the Pro game in his first couple years. The best part about you leaving though… Big Blue won the Superbowl the next year and Eli was Superbowl MVP. Where have you been since? The Giants have gone on to win another Superbowl and guess what? Eli won the MVP of that game too.

Remember when you left and almost brought a whole train of Giants vets with you, Strahan being one since he was sipping your Kool-Aid believing that Coughlin was a terrible coach. He decided to stay. He won a ring with a team that you kept doubting. Strahan retired in his prime and has never discussed coming back, because he knows that at his age he would probably just be a detriment for his team, and he wants the best of the best out of the Giants… and oh yeah he has your dream jobs. Strahan retired and instantly became an analyst. He is electric on TV and genuinely a funny guy. You know what Strahan does too? He backs up his former leader and QB. He picks the Giants and is still invited to team events. Oh yeah, now he is co-host of Live! With Kelly and Michael in the morning. I don’t think anyone had you as even an afterthought for that position.

The final nail in the coffin is that Strahan is a first ballot HOFer. You won’t even sniff the Hall unless a miracle happens and they start letting in a whole bunch of other more qualified RB’s. Sorry that you were a playing in a RB heavy era: Curtis Martin, Shaun Alexander, Corey Dillon, Edgerrin James, LaDainian Tomlinson, Clinto Portis, Fred Taylor, Priest Holmes, Larry Johnson and Jerome Bettis. A bunch of those guys have better career rushing yards and more TD’s than you. There are no precedents from your career that would make sense for you to be in there anytime soon. Strahan has a sack record, was in the NFL Networks top 100 players and his list of awards is twice as long as your’s. He also didn’t leave a team that won the Superbowl the next year, although if he stayed and a certain shot wasn’t fired the Giants would have repeated.
So Tiki… as you fade into obscurity just remember that I could have, anyone could have, wrote this as letter thanking you for your service as a member of Big Blue, of how you carried the team to a Superbowl appearance in 2000. But instead, you bad mouth and put down the team and fans who loved you. You tried to tarnish the name of one of the greatest QB’s this franchise has ever seen. I hope you enjoy getting a couple hundred bones for having dinner with a stranger, because Mike is going to roll around in his Television contracts and be on the field for when the GMEN secure their next title.