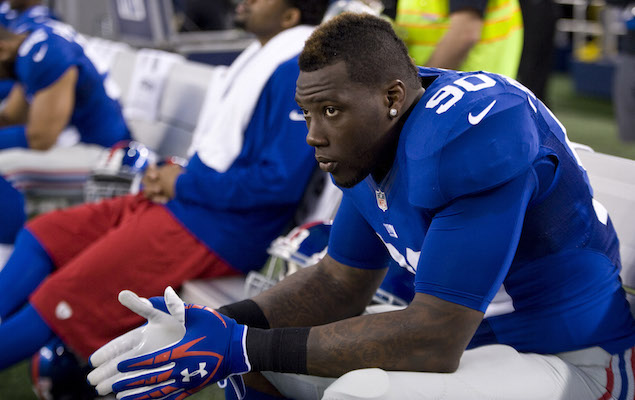 New York Giants defensive end Jason Pierre-Paul is slated to hit free agency in March, and his services will not come cheaply.

Pierre-Paul bounced back from his poor 2-sack campaign in the 2013 season, with 12.5 sacks in the 2014 season. Coming off his rookie deal, the 26 year-old will certainly be one of the most touted free agents on the market in March.

The Giants would definitely want Pierre-Paul back, but is he worth breaking the bank for?  It will be a tough decision for General Manager Jerry Reese as to whether to bring back the talented end who helped the Giants win a Super Bowl in 2011.

Since recording 16.5 sacks in 2011, Pierre-Paul has been derailed by injuries and has had his sack numbers dip. Although he has remained a solid run-stopper throughout his career, the sack totals have not been there the past couple of years. Despite 12.5 sacks this season, 9 came in the final five weeks of the season. Those were basically meaningless games for the G-Men who were out of contention.

Owner John Mara said the franchise tag may be an option for Pierre-Paul, but I don’t see the Giants doing that because it would most likely cost them more then $12 million. The Giants have done a good job in the past knowing when to let go of veteran players such as Justin Tuck, Steve Smith, Jeremy Shockey and Terrell Thomas.

Personally, I don’t think the Giants need to break the bank on Pierre-Paul. Although young pass rushers entering their prime don’t grow on trees, JPP has proven to be untrustworthy and too inconsistent for the amount of money he will be asking for. The Giants have Damontre Moore who, with more playing time, can fill the void created by the loss of Pierre-Paul. Also, the upcoming NFL draft class is loaded with talent at the defensive end position so they could use the ninth overall pick on someone like Shane Ray from Missouri. Hopefully, Pierre-Paul would accept a contract such as the one Michael Johnson received from the Buccaneers, which was five-years, $43.875 million,  and not demand a J.J Watt –type contract.