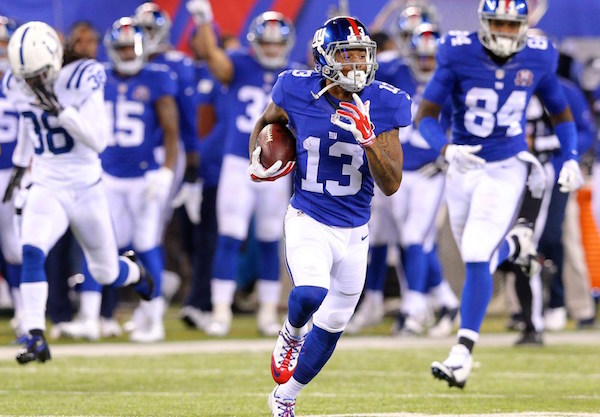 Now that the Giants season is over for this year many fans are wondering, what will the Giants season look like in the upcoming year? After three seasons with subpar records for the Giants many fans have been left with the question if the Giants will have a winning record in the follow season. In my opinion my reply is YES!!!!!!!!

At the start of last season Giants fans had a great deal of disappointment. With an 0-6 start to the prior season it didn’t leave us fans with much to cheer about. This past year the team was wracked with injuries to many key players who were out for the season (Victor Cruz was a huge loss for the G-Men). A new offensive scheme that really didn’t seem to be catching on. It made us all wonder if the Giants would even win a game (I know that I became extremely concerned that there was a slight possibility that might happen).

Then a great light hit the Giants with the return of rookie WR Odell Beckham Jr.! No fan had really had a chance to see his skills in the Giants offense previously, but when we did finally see Beckham Jr. in action the sight of his amazing athletic abilities left everyone speechless! When we saw Odell make that astonishing one handed three fingered catch against their rival Dallas it was a sight of pure beauty. I refer to that catch as the catch that was heard throughout the world. Not a person that saw it (Giants fan or not) will say that it was an amazing moment in football. After the loss of Cruz for the season, the beginning of Beckham Jr.’s  professional career was exactly what the offense needed.  Looking forward into next season, I can see many awe-inspiring catches and touchdowns in store for Beckham Jr. and the Giants once struggling offense.

Besides Odell and his many talents Eli Manning’s stats became increasingly better and his passes much more accurate by the end of the season. I believe with Manning on track, and with the return of a healthy Victor Cruz, who will be playing up to the caliber that us fans are already accustom to it will help the offense immensely. Then we add in Odell Beckham Jr. to play opposite Cruz the outcome will be magnificent! The offense will look like the Giants of old. Fans will see a fast moving high scoring offense that will leave us all chanting GO Big Blue!

The defense was in the average last season I would say. They had games where their great strengths had kept the Giants in the fight. Also there were games where the defense just couldn’t stop the oncoming offense. Like the offense, the Giants defense was also wracked with quite a few injuries this season, which makes it harder for the defense to stop some of the outstanding offensive talents that the Giants have faced this past season. I think that everyone would agree that the Giants schedule was not the easiest last season. However, with the recent rehire of the Giants previous defensive coordinator Steve Spagnuolo (He coached the Giants D to their last Super bowl Title in 2011) and a strong and healthy defense I can see next season going much smoother for the team.

With many decisions still left to be made this off season regarding trades and also the upcoming draft in May we still don’t have all of our answers set in stone. All I know is that after watching the Giants improve greatly by the end of the season. The offense was really starting to come together with Ben Macadoo’s new scheme for them and with smart changes being made on behalf of the owners, GM, and coaches I can already see the upcoming year being a winning one for Big Blue. Hopefully fans will see our G-Men fighting for another Super bowl title next season!

The Giants Return. was written by Guest blogger Mandy Moses Please leave feedback in the comment field below, I would love to know what you think.