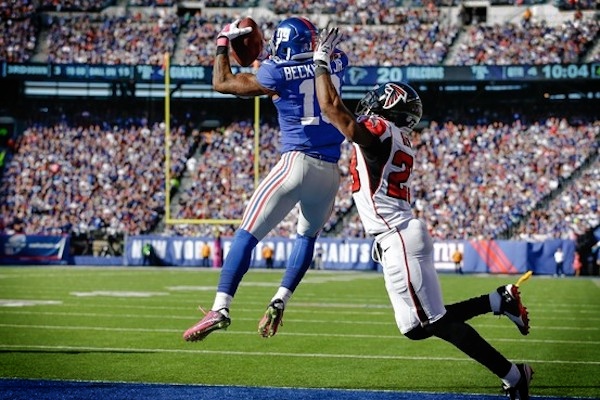 The New York Giants started slowly on Sunday, just as they started the season. The offense did not gain a rhythm for the first two and a half quarters, and the special teams struggled. With 5:37 gone in the third quarter, Atlanta Falcons quarterback Matt Ryan dumped the ball off to speedy back Antone Smith, who then eluded Giants safety Antrel Rolle and darted up the sideline for a 74 yard score. This touchdown gave Atlanta a 20-10 lead, and all of the momentum. The Giants had looked sluggish thus far in the game, committing a turnover on special teams and fumbling away the ball after an interception. They needed some kind of spark. And as it turns out, they got two, and they both came from the same place: this year’s draft as our NY Giants rookies shine.
​
Every contending team has games throughout the season where they get an improbable boost from an unlikely source in the face of adversity. At home against Atlanta, rookies Odell Beckham Jr. and Andre Williams provided exactly that.
​After being drafted 12th overall, wide receiver Odell Beckham Jr. had great expectations. But, after injuring and then reinjuring his hamstring in training camp, he did not see game or practice time for all of the preseason, and a quarter of the regular season. Frustrated Giants fans had to wait until week 5 to see their first round pick see the field. Even Beckham felt like he was letting his teammates and himself down by not being able to play. But in just one game, disappointment and doubt turned to excitement.
​
Known in college for his game-changing ability, Beckham made an instant impact in his long awaited NFL debut. After Smith’s score, the Giants came back to score an 81-yard drive that featured Beckham drawing a 26-yard pass interference penalty. The momentum was starting to shift thanks to Beckham’s presence on the field. Now down only three, the defense forced a three-and-out, an the Giants took the lead with an 11-play, 64-yard drive that featured passes of 14 and 15 yards to Beckham, culminating in a leaping grab in the corner of the end zone to take a 24-20 lead. Quarterback Eli Manning displayed great trust in the rookie receiver on his first career touchdown despite their lack of practice reps together by throwing the ball up for grabs despite the defender’s good position. Beckham’s debut was undoubtedly memorable, and his impact truly changed the game.
​Along with Beckham, rookie halfback Andre Williams came up huge in the Giants’ week five victory.

Head Coach Tom Coughlin has always preached that if a player goes down, the next player in line has to step up. The fourth round pick has already shown this season that he can be an effective change-of-pace back, but after starting halfback and NFL’s third leading rusher Rashad Jennings was forced out early in the third quarter with a sprained left knee, Williams was the next man up. Williams scored on a 3 yard run that capped a long drive that shifted all of the momentum towards New York. On 20 carries for 65 yards, he showed his ability to bounce off tacklers and fall forward for extra yards. He even displayed his immensely improved receiving game when he caught 2 passes for 18 yards, a feat he did not achieve all of last season at Boston College.

In the Giants’ come from behind win against Atlanta, unlikely sources provided needed boosts for a team down 20-10 at home. Andre Williams produced when needed after Rashad Jennings went down with an injury, scoring a pivotal rushing touchdown. With other offensive weapons being held in check (Larry Donnell- 0 receptions for 0 yards, Victor Cruz- 3 receptions for 22 yards), Odell Beckham Jr. stepped up when his team needed him and caught the game-winning touchdown. As the Giants keep rolling, they will need different guys to step up and make plays to win each game. In a week five victory, two players with a combined 4 career games played stole the show.