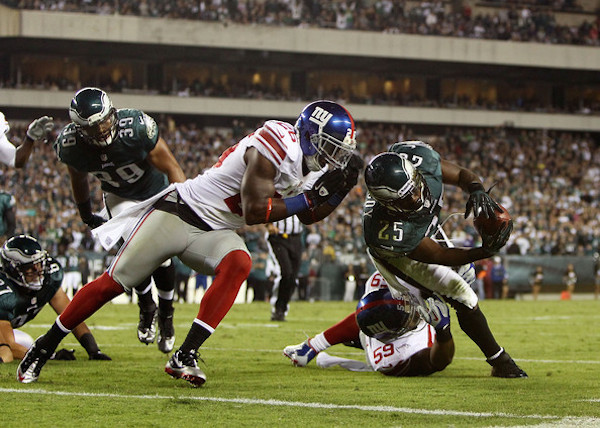 Here is both sides of the story. Calling upon Bleeding Green Nation’s Associate Editor Mike Kaye to State his case for the Eagles beating the GMen.

This is a game that Eagles fans either feel very (foolishly) confident about or are scared to death of at this point. The Eagles have been extremely inconsistent as they have willed their way to 4-1. The team is not as good as it looks on paper and really has caught a bunch of breaks. That said, the team is still talented and Chip Kelly has really been able to make things work, despite his stubbornness with the personnel. The Eagles aren’t a bad team by any stretch, but this is definitely a winnable game for New York. However, if the Eagles somehow turn the offense on in this one, good luck. The offense has mostly been a sleeping beast, but (if or when) it wakes up, this team (will or could be) scary.

If Nick Foles plays like he did against the Redskins.

While Foles’ yardage numbers are fun to look at and his 8-to-5 touchdown-interception ratio is fine in the grand scheme of things on paper, he just hasn’t played well. He has mostly stuck to being mediocre in the first three quarters and then turns it on in the fourth quarter. He has been extremely inconsistent and his performance against the 49ers in Week 4 was eye-opening in a very bad way. He also was the main reason why the Rams had a shot at a comeback against the Eagles in Week 5 after he fumbled (Eli style) with a face-first slide.That said, if he plays like he did against Washington in the team’s only divisional game, the Eagles will be in very, very good shape. Foles has struggled with his accuracy and had trouble in the redzone, but the Washington game was maybe one of the top three performances of his career. He got the ball out quick, made the right reads, moved left out of the pocket (dangerous for defenses) instead of the right, threw some absolutely incredible passes and connected with receivers. The Eagles defense kept it close for Washington, but Foles played a great game and seemed in control. I thought he looked a lot more accurate against the Rams and he will be at home, which has seemingly helped him this season. The Eagles have won seven-straight regular season games at The Linc.

If the pass rush continues to get home.

The Eagles did not have a sack in Weeks 2 and 3. However, in the last two games, the front seven has combined for eight sacks, 10 quarterback hits, three forced fumbles, three fumble recoveries and two batted passes. That is incredible production for the unit, which has had a lot of issues getting to the quarterback. Outside of missing inside linebacker Mychal Kendricks, the front seven has been pretty solid, even without getting pressure. Cedric Thornton is one of the best run-stoppers in the league and Fletcher Cox continually gets pressure. Connor Barwin has been fantastic this season and now that he is finally making an impact as a pass rusher, it’s made everyone else’s jobs much easier.

If the Eagles can continue to force turnovers and dominate on special teams, the Giants will be in big trouble.

The Eagles defense has allowed a lot of yardage over the last five games, but the unit’s saving grace has been the ability to cause turnovers. The team has had at least one takeaway in each of its last 18 games. The Eagles had three forced fumbles and recoveries against the Rams with one going for a score and Malcolm Jenkins had three straight interceptions from Week 2-4 with one going to the endzone.

Special teams has been elite for the Eagles. The unit already has two blocked punts for two touchdowns, a kick return touchdown and a punt return touchdown. They are also very good at making stops in return coverage. It is safe to say this is the best special team unit in the league and easily the best Eagles squad of its kind in probably two decades. If the Eagles can produce points with the defense and special teams, it will give Foles and the offense a big cushion and the Giants a big hole to overcome.

This is why I believe the Giants will win.

Now for our GMEN written By @tmerritt51.
New York Giants vs. Philadelphia Eagles.  NFC east rivals with at least piece of first place in the division on the line while being the Sunday Night Football game. Are you excited? I know I am. I think I am more excited because I feel the Giants will win and this is why.

Rare means that it does happen every game.

How awesome is it to see a blocked punt, kick return, an interception brought back for a touchdown, a fumble brought back for a touchdown or whatever. These are all exciting plays. Do you know why they are exciting because they don’t happen often. So if a team only wins / is in games because of “rare” plays then odds are one of these games it is not going to happen. Then what? I will tell you what they will not win. Now what team am I talking about? Oh you guessed it if you have watched the Eagles at all, this is what is going on in their games. Now I know the Giants like to have lapses on special teams and they used to turn the ball over a lot last season but I have to believe that Tom Coughlin just maybe focused on this during this week in practice, they will be prepared. The Giants are not giving the ball away often/ if at all in this recent winning streak. It’s funny how turnovers have an affect on who wins the game. Giants have shown they will win that turnover battle this season, so far.

Philadelphia 24th in the league defending the run vs. New York 15th in the league running the ball. New York 10th in the league in defending the run vs. Philadelphia 23rd in the league in rushing.  What does that mean (this is for you simple folks out there or Eagles fans) Eagles can’t run or stop the run. Eagles have shown at times they can be a dynamic offense but that means nothing if they aren’t on the field and they are one-dimensional. Just to rub it in, this also means the Giants are running the ball and they are stopping the run. Do you get it, do you understand the words that I am writing. This is for the “best running back in the league” Lesean McCoy, you have not broken 100 yards yet. (that is not good especially for my fantasy team so thanks for nothing) My prediction Andre the Giant will show Lesean how to break not only 100 yards rushing but how to break 150.

This is not last year’s Eli or Nick Foles.

Now as a Giants fan I hate even admitting how good Nick Foles played last year but there is no way it was going to be duplicated this season and it hasn’t, he has 5 ints already this season when he had 2 all of last year. So obviously since Nick Foles has taken a step back to reality so has the Eagle’s offense. The opposite is true for Eli Manning he was Captain Interception last year.(in part because of reasons that were not his fault) Eli is becoming consistent and dangerous (66% completion percentage this season) so the Giants offense is getting better. While it is still early in the season it seems that Nick Foles’s play is descending while Eli’s play is improving. (as he gets used to this brand new offense that hasn’t reached its potential yet, be scared). Is there any reason why these trends will change during this game, I don’t see why they would. Do you?
This is why I believe the Giants will win. Now I know this will be a tough game, it’s the Eagles. I wouldn’t expect anything less. But I don’t see/ feel Giants having any fear of this game. The confidence is high and the momentum is with the Giants. I think this team wants to prove themselves to this division and the league.
Giants will Win!