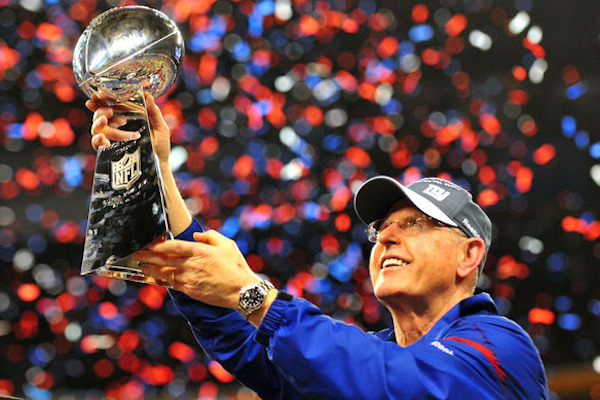 As New York Giants fans I want you to do something for me and for you. Lets get caught up in the hype because as loyal Giants fans this season seems like a sort of déjà vu. This feels like the Giants are going to make a Super bowl run.

I know this just sounds like the ramblings of a super fan but lets look at the similarities to our recent Super Bowl appearances.

1. The Giants were not given much of a chance to do anything this season such as most of ESPN predicting a 6 win season. But now that we are on a winning streak they are hopping on the bandwagon. (let them know we don’t need them) Just like the Giants were not meant to do much in ’07 and ’11. We know how that turned out.
2. They lost the first 2 games then went on a winning streak just like 2007.
3. Eli is still here. It seems like every time that people starting doubting how good he is, he proves them wrong in a big way. (like a Super Bowl MVP maybe?!) (Stop burning your Eli jersey and go Buy a new one)
4. Tom Coughlin. Old, reliable is still our coach. Yes he is oldest coach in the league but as he did in our Super Bowl runs, he was willing to change for the betterment of the team. The offense was changed and we are starting to see the pay off but we haven’t reached its potential yet, which is exciting and should be scary for the rest of the NFC east.
5. The Defense has the same make up as the Giants like to have: A solid front 4 that can cause havoc in the backfield. Linebackers are better than we have had in years. Great Secondary play. Again this whole squad is just getting used to each other and has not yet reached its potential. (This is awesome to know that they will get better)
6. What is that? Do the Giants have a running game again. (thank you OL for getting it together) As we know Eli is one of the best play action Qbs in the league. This all equals an offense to be dealt with.
7. There are more similarities but come on people its still just about week 6.

Now you have followed me down this road so far lets imagine that I am right. (which would be awesome) Giants Win another Super Bowl. Eli is a 3 time Super Bowl MVP.

What would that mean:

1. New York Giants will be a 5 time Super Bowl Champion which would put them in an elite class of teams (San Francisco 49ers, Dallas Cowboys, Pittsburgh Steelers: the only team with 6)
2. Eli would be a 3 time Super bowl Champion/ MVP which would mean he would be only the 2nd person to do it and the other is Joe Montana. I would have to say it should guarantee him the Hall of Fame and allow him to take his rightful place in being considered elite. He would be the unquestioned best Giants QB ever. (which you could argue that now)
3. Now I am going to say something sac-religious to a Giants fans so just send your complaints to my twitter account because I have no problem arguing with you. If Tom Coughlin wins another Super Bowl he passes Bill Parcells as the best Giants coach ever. (one thing Tom was willing to do was change was Bill?, he just moved on)
4. We would all have another year as Giants fans to be able to talk shit to other fans which is really one of the best parts of the team you root for winning the Super Bowl.

Ssshhhhhhh I know you are happy in this dream. But…….

It is week 6 and Giants are going to Philly. This is going to be a big test these next two weeks of divisional games. We will see if the Giants are following my, I mean our dream.

I am predicting a big W. how about you?

I dream this way because I bleed Big Blue. What do you bleed?

Tom Coughlin To Interview With The Eagles