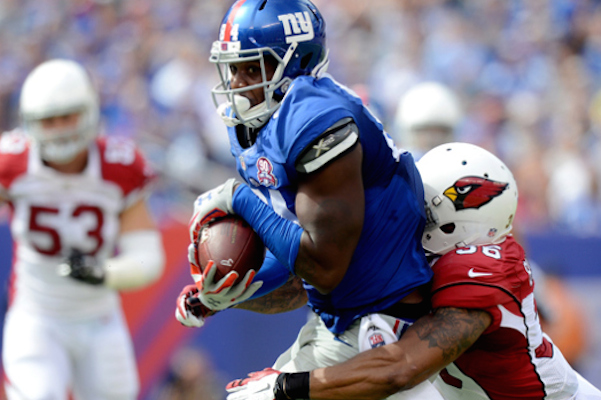 As the 2014 preseason came to an end, few offenses looked worse than the New York Giants’. Though they did not lose a preseason game, the first-team offense was woeful, as Eli Manning completed 20 passes out of 31 attempts for just 188 yards, and one touchdown in five games. Starting wideouts Victor Cruz and Rueben Randle combined for only seven catches, while first-round draft pick Odell Beckham, Jr. sat out the preseason with a lingering hamstring injury (he has yet to return).

The tight ends were even worse. Adrien Robinson, Daniel Fells, and Larry Donnell split reps, and it was impossible to tell which one would end up starting come the regular season. It didn’t really matter. No Giants tight end was going to do much in 2014, and anyone playing fantasy football knew it.

So when the Giants began the regular season in embarrassing fashion, getting hammered by Detroit 35-14 on Monday Night Football, most people failed to even register the fact that Larry Donnell played a pretty good fantasy game, catching five passes for 56 yards and a touchdown. He was targeted in the end zone no fewer than three times, and led the Giants in receptions, receiving yards, and targets.
In week two, the Giants were again humbled, this time by the Arizona Cardinals, but again Larry Donnell fantasy gem emerged, grabbing seven of his nine targets for 81 yards. He followed it up with a team-high six receptions against Houston in week three.

Despite three solid games in a row, Donnell was still owned in less than 20 percent of fantasy leagues as of Thursday morning.
This will change dramatically before the Giants play their next game though, as Donnell exploded for three touchdowns and 54 yards against the Redskins on Thursday night, and he is showing no signs of slowing down any time soon. He currently leads the team in receptions, targets, and obviously, touchdowns.
But Donnell is not the only Giants tight end outperforming expectations. Even backup Daniel Fells has found the end zone three times, which is more times than Jimmy Graham (a first-round fantasy pick in most leagues), Rob Gronkowski, Greg Olsen, Jason Witten, Zach Ertz, and Vernon Davis.

The success of the Giants’ tight ends is only possible because of the sudden resurgence of Eli Manning, who is off to one of the best fantasy seasons of his career. For starters, he has a 9-to-5 touchdown-to-interception ratio. He has thrown for just under 1,000 yards, and has even scampered for a rare rushing touchdown. After his 300-yard, four-touchdown performance on Thursday night, Eli Manning needs to be considered for a roster spot in all fantasy leagues.

Finally, 29-year-old running back Rashad Jennings is taking full advantage of his first real lead-back opportunity. After years of backing up Maurice Jones-Drew in Jacksonville, and then Darren McFadden in Oakland, Jennings is finally a featured runner in New York. So far, he has gained 331 yards on the ground, run for two touchdowns, and been heavily involved in the passing game, too. He has played like a true premier ball-carrier, and he currently ranks among the top five fantasy running backs.
The Giants offense had everybody fooled for a while, but their newfound consistency and production can no longer be ignored. They are a goldmine of waiver claims and free agent pickups for your fantasy league.

About The Author:
Ron is the lead editor of FantasyFootballOverdose.Com – prime source of NFL news and rumors. You can follow his NFL updates at this Facebook page.