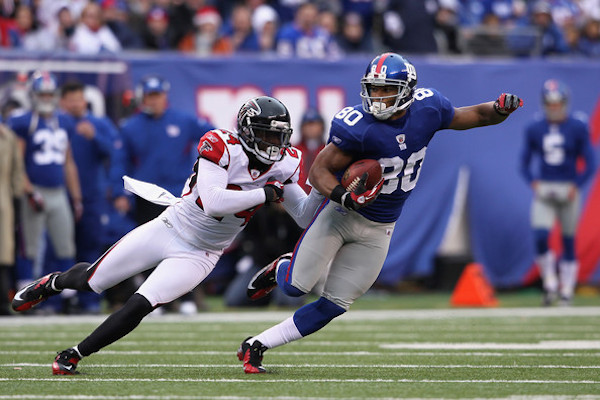 State Your Case Atlanta Vs Giants

We asked Matt from TheFalcoholic.com to “State Your Case” and give us three reasons why the Falcons will beat our beloved G-Men!

This should be an interesting game with both the Atlanta Falcons and New York Giants showing maddening inconsistency through the season. Believe it or not, it is pretty hard to come up with three reasons why the Falcons will win when their defense has been non-existent. If the Falcons can suddenly play on the road, I bet it will be because of these three reasons.

1. The offensive line keeps pressure away from Matt Ryan.
As has been a common theme with the offensive line in recent years, the team is dealing with multiple injuries and was actually forced to start a tight end at right tackle against the Minnesota Vikings. The difference between pressuring Ryan and not pressuring Ryan can be seen in his back to back performances against the Cincinnati Bengals and the Tampa Bay Buccaneers. The better protection, the more likely the deep plays can develop, which the Falcons will need to counterbalance their defense.

2. Devin Hester and Antone Smith touch the ball.
While Julio Jones making some big plays is nearly a given, Hester and Smith have shown to be ridiculously explosive athletes that can outrun defenses. Both players have only 13 offensive touches a piece, but have 5 touchdowns on those 26 total touches, many coming from over thirty yards out. The Falcons will need to rely on some players who can make something out of nothing, and Hester and Smith can do that. If they can get some huge gains in yardage, the Giants defense will need to give them some space and slow down their blitz.

3. Mike Nolan figures out how to coordinate a defense.
Falcons fans have grown understandably irate at defensive coordinator Mike Nolan. Quite simply, there is no predicting how badly the defense will be mismanaged. He relies heavily on confusion and surprise, such as placing OLB Kroy Biermann on coverage of Greg Jennings. Rookie Teddy Bridgewater sliced right through our defense like we were a Pac-12 team. Many players are forced into roles that they do not fit in, young but impressive players like OLB Jonathan Massaquoi are given few, and inconsistent, snaps, and this has all resulted in the Falcons being on pace for the 2nd worst defense in NFL history.

If Nolan can make a concerted effort in playing young players and make less bewildering defensive plans, the Falcons should win this one. I said in the offseason that the Falcons will make it to the playoffs if the defense can become average, but they are not close and have not been getting better. Realistically, the Giants offense will have one of their best games of the year on Sunday.

Life on the road is tough.
Atlanta has not faired well with traveling as they are 1-9 over the last 10 road games when played outdoors. The last time the Giants and Falcons squared off at MetLife Stadium was three years ago; it was a 24-2 blowout and sparked the G-Men’s Super Bowl run.

We have to address it,” Said Falcons head coach Mike Smith. “We’ve had conversations as coaching staff, with the players. It’s hard to win on the road but if we want to be kind of team we want to be we’ve got to split on the road. Right now we have not played anywhere close to getting the outcome that we want.

Yards equals points
If you look at the numbers Atlanta has one glaring weakness. The Falcons are giving up some crazy yardage. For the first 4 games Atlanta allowed an average of 153 rushing yard per game ranking 28th in the league. The Falcons also currently ranked second to last in passing yards allowing an average of 276 yards by air per game, only fairing better than Jacksonville. Letting the other team move up and down the field only equals to points, 113 to be exact, not good.

Pound that Rock
I have been calling it all season. Pound that rock and keep the passing game wide open. Rashad Jennings and Andre Williams should be able to move the chains against an imploding Atalanta defense. Williams had a nice game prior with 66 yards and 1 TD. Expect the Giants to start to pace Jennings, and give more touches to Williams.