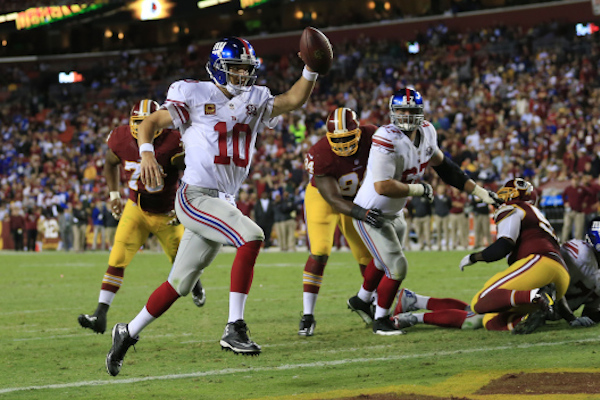 Coming off of their best game of the season by a wide margin, Eli and company had hoped to carry the momentum from their first win with them to Washington. They did just that, and then some. They absolutely dominated the Redskins on both sides of the ball. Giants Rout Redskins.

Offensively, they scored 45 points, which they had not done since they defeated New Orleans, 52-27, on Dec. 9, 2012.  The offense gained 449 yards and accumulated 31 first downs, their highest total since they had 32 against Philadelphia on Dec. 30, 2012. They also dominated time of possession, controlling the ball for 37:17 compared to the Redskins’ measly 22:43.

Defensively, they forced a remarkable six turnovers, picking off Redskins’ quarterback Kirk Cousins 4 times and forcing 2 fumbles (One of which was Cousins). They held Alfred Morris, who had the 4th most rushing yards in the NFL through three weeks, to 63 yards. Desean Jackson, longtime Giants nemesis, who always seems to play well against New York, had only 1 reception for 9 yards.

There were several Giants who played extremely well such as Victor Cruz and Larry Donnell, but the game ball undeniably goes to the quarterback. Manning completed 28-of-39 passes for 300 yards, threw 4 touchdowns and ran for another, while throwing one very questionable, unlucky interception in which a pass thrown to Reuben Randle got ripped out of his hands in the end zone that was deemed not to be a completed catch before being knocked out and then intercepted by Redskins’ Keenan Robinson.

Before the season started, Manning as well as offensive coordinator Ben McAdoo notably declared that Eli should complete 70% of his passes in this west-coast style offense. Most on the outside declared this a ridiculous notion, but on the season, Manning has completed 67% of his passes and has eclipsed 70% in his last two games. These numbers are light years ahead of his mediocre 58% completion percentage of last season.

Manning completed 18 of his first 20 passes, and the two incompletions resulted from drops. He seemed as comfortable in the pocket as he has been in a long time and did not force many throws, a trait that has plagued him his entire career. His five total touchdowns are his most since the final game of the 2012 season against Philadelphia. The Redskins simply could not stop him. He picked apart a defense that was ranked in the top five coming into the week in total defense. Eli was that good.

To put Manning’s dominant performance in perspective, he recorded a total quarterback rating (Total QBR) of 97.5 on Thursday. This is an advanced metric that incorporates context of throws and what they mean for wins in addition to just numbers. The highest possible Total QBR that a quarterback can attain in a game is 100. Eli was nearly perfect on Thursday. He has recorded a better Total QBR only four other times in his career. But also, it is the fourth-best game statistically any quarterback has had this season.

Nobody expected such a dominant performance from Manning, and the doubters will probably discount it as a fluke. Regardless of how the future pans out for this offense and for Manning this season, his performance in Washington was one for the ages.