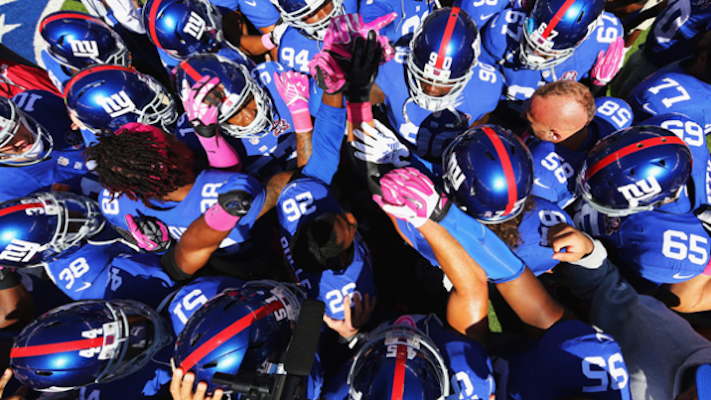 This past week was pretty exciting for our New York Giants as it provided the most action I’ve seen this season. Despite the brawl with the Rams which resulted in a few of our players being ejected! (in my opinion they shouldn’t have). Odell Beckham Jr. “O” took that raw energy out on the field by scoring 2 TDs fueling a NYG win.

Rehab continues for Victor Cruz as he took the podium standing strong looking healthy. He addressed the media regarding his 2015 return and looking forward to playing along side Beckham. Both Cruz and Odell appeared on the Rachel Ray Show this week. Cruz zipped the football to Odell who caught it with one hand (of course).

The announcement of JPP and “O” named as alternates to the NFL 2014 Pro Bowl was music to my ears topped off with Beckham being named Pepsi Rookie Of The Week! It was reported that Coach Coughlin had a discussion with “O” about toning down his endzone celebration dances. In my opinion if  Odell scores a TD he should continue to be himself and do that “whip” dance I luv it! it’s just horrible that some NFL players “hate” on our Giants especially rookie “O” by taking late hits and trash talking. I’m noticing more NFL players of other teams using “O” endzone dances smh copycatslol but, his popularity continue to increase around the world and NFL “O” continue to give his all on the field and be humble.

As 2015 approaches our Giants season sadly will come to an end against the Philadelphia Eagles. Sadly it looks like we’ll finish in 3rd place In the NFC East (again).  It this beats being in the “basement”. Plenty of decisions are to be made this off season. Standout Giants players JPP and Antrel Rolle will hit free agency . Rumor mill I has JPP asking to be the highest paid DE in the NFL!

I’ve already started planning and packing for the 2015 NFL draft that will be held in Chicago, IL. The Giants are in a position to acquire a top 10 draft pick. I hope we get an offensive lineman. There’s also gonna be a few awesome players in the free agency our Giants can choose from as well (fingers crossed). Hopefully, the Giants can continue to play hard good football for a great finish as we all look forward to a healthier stronger better 2015 NYG season. I’ll be gearing up in blue looking forward to a NEW NFL season, NEW year and seeing the NEW York Giants! I bleed blue!

We are gearing up for the off season, and looking for some new blood to contribute to this site. “NY Giants Last Game For 2014” was written by Guest blogger G-Diva Joce Brown. Please leave feedback in the comment field below, I would love to know what you think.

To Submit your own articles use this contact page.

Giants And Eagles Play For Pride