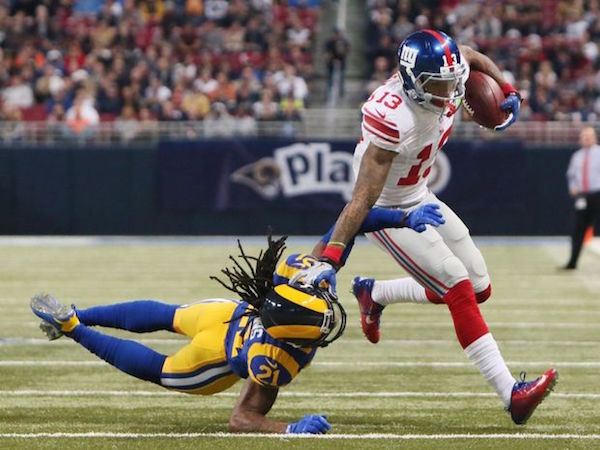 If Clint Eastwood directed a football movie todays Giants-Rams would have been The Good, the Bad and the Ugly.

The Good
Let’s be honest  Odell Beckham Jr. was absolutely the best player on the field. His numbers were lights out 8 recs for -148 yards; average of 18.5 yards per catch and 2 TD’s. Highlighted by the 80 yard bomb for a touchdown from Manning and has cemented  Rookie of the Year .

Ruben Randle had a coming out of the “dog house” party today with 6 catches for 132 yards and 1 TD and  proves Tom Coughlin has not lost the room .Yes, it is simply- “Coughlin’s way or the Turnpike”! Lesson to be learned – be on time.

The Bad
Easy to say penalties and Big Blue lead all the way in yellow hankies (12 for 149)-unacceptable. Coughlin lead teams are supposed to be more disciplined.

Will Beattie played “The leader of the hankie” with 3 holding penalties.  (Actually called for 4 holding penalties but according to David Diehl they called his number in error).Given Beattie has the difficult task of defending Manning’s back side. But three holding penalties just can’t happen. If they were playing a better opponent those will come back to bite you in the “you know what”.

Rodgers-Cromartie- going down in the second half with a “stinger”. Have to feel for a guy like that who has battled injuries all year.

The Ugly
No introduction needed ; “The Brawl” on the Giants sideline after the late hit on Beckham Jr. Some call it “passion”, some say “tempers flared” in my humble opinion “ridiculous”. Throughout the game the pushing and shoving was way beyond what we normally see between the lines.  The late hits and hits out of bounds by the Rams were dangerous. “This is nothing new for a Jeff Fisher coached team”- Roman Oben

Not saying Big Blue was innocent by any means with the “trash talk” and celebration between the Giants offense (Beckham) and St. Louis defense.

Have to say Big Blue got each other backs- again proves how much the players like each other and the fact Coughlin still has them motivated.

The last time I saw fighting of this magnitude during a pro game was the Islanders and Penguins back in 2011.