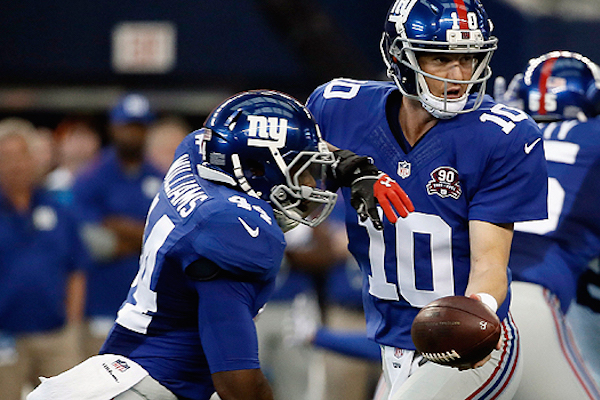 It is week 16 and the Giants are actually on a winning streak. Now they will face the up and coming St. Louis Rams in St. Louis. This is the team that no one wants to face right now but I will let you know 3 reasons why the Giants will be on the winning side this week.

Anyone that has been watching the NFL this year would not believe this but the Giants defense have more sacks than the Rams defense this year. The Giants pass rush is trending upwards due to some young players starting to figure out to how to show their talent on the field such as Jonathon Hankins, Damonte Moore, and Devon Kennard. These young players are making plays along with JPP that end up with the quarterback going down. The Giants pass rush will be riding this momentum into a game where they will be facing this Rams offensive line that has some injuries across it and have given up 40 plus sacks so far this season. Shaun Hill might be a serviceable back up but he is not a huge threat to run. So with Hill playing behind this shaky offensive line this seems to be recipe for the Giants to add to their sack total.
Giants pass rush getting to Shaun Hill = Giants win.

Giants have a better offense than the Rams offense. The Rams offense rank among one of the worst in the league and the Giants are ranked in the middle of the league while still learning the new offense. The Giants have the experience of the 2 time Super bowl MVP Eli Manning while the Rams depend on a journeyman QB Shaun Hill. The Giants have Odell Beckham Jr. who is already one of the best WRs in the league while the Rams have one WR (Kenny Britt) who has more than 600 yards and has no WR that has more than 3 touchdown receptions. The Giants offensive line is not great but it has given up less sacks than the Rams offensive line. So with all that being said who would you trust to score more points?
Giants offense have a better chance of scoring points than the Ram offense = Giants win.

Giants are playing for Tom Coughlin:

Giants are playing for more than pride. Both these teams are out of the playoff contention but the difference is that the Giants are trying to make sure their coach is back next year. There has been nothing but support for Tom Coughlin coming from his players and even his former players to make their want to have him keep his job known. This decision will not be up to the players, all they can control is how they play while he is the coach to influence management’s decision. This gives the Giants motivation at a time where each team is looking for it, when there is technically nothing to play for. Coughlin led Giant teams seem to always go on long streaks whether it is a winning or losing ones. The Giants are only on a 2 game winning streak and I am sure they want to end this season on a upswing.
Giants playing for their coach = Giants win.