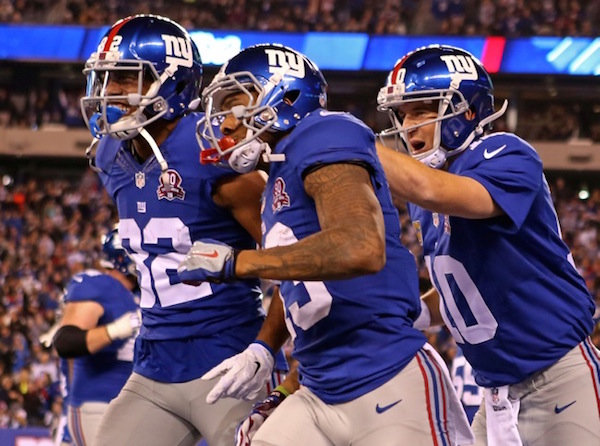 Giants And Eagles Play For Pride

It is week 17 and this is the end of a tough, rebuilding season for the Giants. But they are on a 3 game winning streak right now and want to end the season by extending that number to 4. The Giants face the Eagles who beat them easily earlier in the season but I will give you my reasons why the Giants will extend that winning streak along with getting revenge on the Eagles.

The momentum is with the Giants:

Both teams are riding 3 game streaks the difference is that the Giants are on a winning one and the Eagles on a losing one. The Giants are gaining confidence with every victory while also gaining hope for what they are capable of next season. The Eagles went from almost a lock to win the division to being completely out of the playoffs. Eli is coming off his best game of the year while Mark Sanchez ended the Eagles playoff hopes with an interception at the end of the game that gave that game away. Odell Beckham Jr. is on one of the best receiving runs of all time while the Eagles secondary continues to get torched, which is a big reason for their losing streak. Everything is starting to go right for the Giants and the exact opposite is happing for the Eagles to end this season.
Giants continue to ride this winning momentum Giants and Eagles play for pride= Giants win.

Ben McAdoo came in with an offensive system from Green Bay, which was supposed to allow them to be more explosive while also decreasing the amount of turnovers. Well it took awhile but the Giants have learned the system. The Giants just faced a defense that did not give up an offensive touchdown in the 3 games prior but they put up 37 points on them. The Giants had a 391 yards passer, 2 100+ yard Wrs and 100+ yard rusher in that game. The biggest thing that you should take out of the game against the Rams, which have one of the defensive fronts in the league, the Giants only gave up one sack. The Giants are getting better on offense facing an Eagles team that is 25th in passing defense and have given up 29 passing touchdowns. The better the offense plays the more time the defense gets to rest so they can perform at the top of their game.
Giants offense passing all over the Eagles = Giants win.

The Giants were humiliated in Philadelphia when they were shut out 27-0 in week 6. The Giants not only lost the game but also lost Victor Cruz with a season ending injury. The Giants have since learned how to play without Cruz and it allowed Odell Beckham Jr. to fill that number 1 Wr role, which he has done as well as anyone has ever done. The Eagles started the Giants on that 7 game losing streak and based on comments made by players this week that is not forgotten. The Giants have come together since that game showing that they are learning the systems put in place, showing an excitement/ want to win, and they are playing for one another. There was a brawl in this past game with the Rams but it was teammates sticking up for one another and Tom Coughlin didn’t even have a problem with it, showing that he knows it is a good thing. There was a big turnover in the roster this past offseason but now it seems that have bought in and playing together granted it was too late to make a difference for this season.  This game is at home for the Giants not only will they want to avenge the shut out loss, but also they will want to show the fans what kind of team they can expect next year.
The Giants playing for more than a game = Giants win.