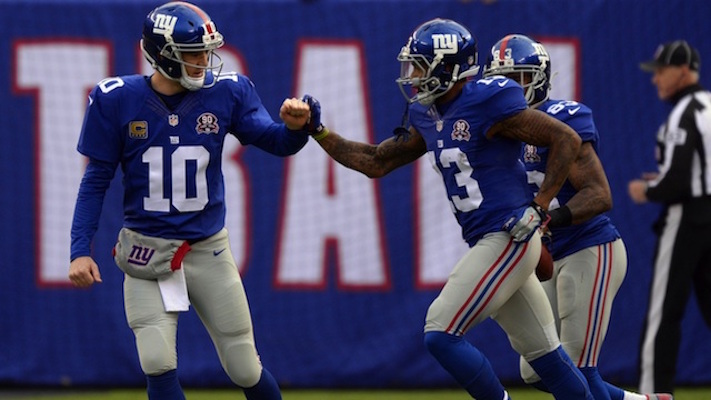 The Final Nail…err Report Card for 2014

The Giants closed out their 2014 season the same way they ushered it in back in September, with a loss. And as NFL coaches get their walking papers, it is time to evaluate, especially if you did not receive an invitation to the playoff dance.

The numbers are awesome 91 recs 1305 yards 12 TD’s and 108 yards per game. ODB brings so much, a player that can stretch the field. A dynamic play maker not seen since the days of LT, he will make other players better, defenses will have to game plan for him, has swagger and excitement. Big Blue fans the “future is bright you gotta wear shades” Grade A+.

At 10 years in the league, Rolle often proves why he is a captain of the team. With 71 tackles and 3 interceptions his numbers are devastatingly consistent over his career. More importantly he is a leader in the locker room. I even enjoy listening to him when he appears on WFAN. He is upfront ,direct and believes in what they have begun…”Once a Giant always a Giant”. Grade A

It is tough to say go and spend 50-100 million dollars on a defensive lineman. However, if you don’t it is just as difficult to think of replacing JPP. No one can ignore his 12.5 sacks this year or the 42 sacks he has amassed in 5 years. He often is double teamed, which should give others opportunities on defense. Remember you win or lose in the trenches. Grade A-

The numbers 4410 yards 30 TD’s and a completion percentage of 63% should have earned an “A”. Well unfortunately for Eli this year just too many critical interceptions (like at the end of yesterday’s game against the Eagles). Why so many interceptions? The answer is simple “too many times playing from behind” (Mike M. in the parking lot). The truth be told there are not many other QB’s you would rather leading your team. He is cool, accepts the responsibility of a leader, and prepares. Grade B+

Hopefully reaching his potential. Each year he has steadily improved. Seemed to be everywhere on defense (74 tackles, and 2.5 sacks) against the Eagles. Grade B

Also giving the Giants hope at the linebacker position.. Unfortunately did not play in the season finale due to a toe injury. He has the NFL genes and in 12 games 35 tackles with 4.5 sacks. Not a bad season for a rookie. Grade B-

Took too long for McAdoo’s offense to take hold. By the time the offense looked in sync the Giants were 3-7. Defensively way too much time for opposing quarterbacks see Tony Romo 8 seconds. Special teams was an issue all year. Tom Coughlin unable to get the red flag out of his pants. The positive, they kept the team motivated and had tremendous effort down the stretch. Grade C+

The tandem of Jennings and Williams combined for almost 1,400 yards and 11 TD’s. Hard to imagine just too many injuries . Honestly this is a spot that Reese should address in free agency with the likes of a Frank Gore available. Grade C

3-5 just unacceptable- home field is too important in the NFL. The division record 2-4 simply can’t lose the way they did as often as they did to Dallas and Philly. Two lowly victories over the Redskins. Grade D

Victor Cruz, Jon Beason and Geoff Schwartz- out for the season- Grade INC

Eli Manning sacked 28 times. Way too many times no “push” on short yardage situations. Their lack of protection and inability to establish the run game often resulted in “3 and outs”. Injuries shifted players to other positions. Just too poor. Grade F.