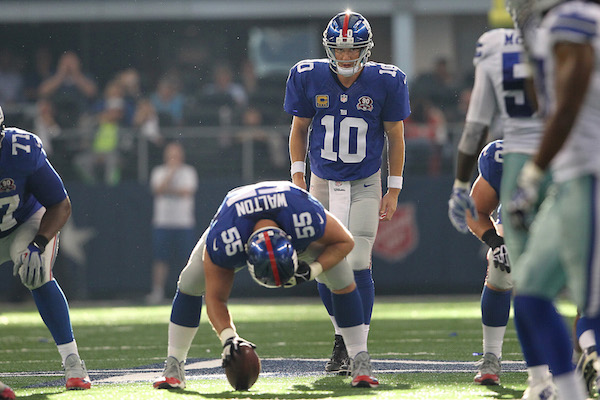 The Giants Should Sign Eli Manning to a Contract Extension.

Veteran quarterback Eli Manning, who will enter the 2015 season at age 34. Unless changed he will start the 2015 season with one year remaining on his current contract. He is scheduled to make $17.5 million next season and will count $19.75 million against the salary cap next season. He’s more than willing to enter 2015 without an extension that guarantees his job security past next season

“I don’t mind playing on the final year of the contract. It does not bother or me or make me worry about one thing,” Manning said.  NJ Advance Media

However, the Giants should sign him to a contract extension.

Despite the 6-10 record of his team, Manning was one of the few bright spots. Statistically this year was one of the best seasons of Manning’s career despite learning a new offense for the first time since his rookie season. He finished with 30 touchdowns and 14 interceptions in the first-year offense coordinated by Ben McAdoo. The 30 touchdowns and 4,410 yards passing were also the second most of his career. Despite attempting the most passes of his career, he threw the second fewest interceptions in his career, only behind 2008 when he threw only ten. If the Giants intend for Manning to be their quarterback for the foreseeable future, which is in the best interest of the team, it would befit them to sign him to an extension. The additional years would allow them to lower his salary cap number considerably and allow for the team to address glaring needs on defense in free agency.

Manning and the Giants offense improved considerably as the season went on. They averaged 29.8 points over the final five games and won 3 of those contests. Manning averaged 315 yards passing in those contests, and looked substantially more comfortable in the West Coast-style offense. In one of the wins, they scored 37 points and gained 514 total yards against a stout Rams’ defense that was one of the best in the league. In that game, Manning threw for 391 yards and 3 touchdowns without throwing a single interception.
He has also developed great chemistry with young stud wide receiver and Offensive Rookie of the Year favorite Odell Beckham Jr. They have developed great trust in one another despite only playing three-quarters of the season together. This chemistry will continue to progress for years to come. Manning will also have a full offseason to perfect his understanding of the intricacies of the offense heading into 2015, unlike last offseason where he had to start from scratch.