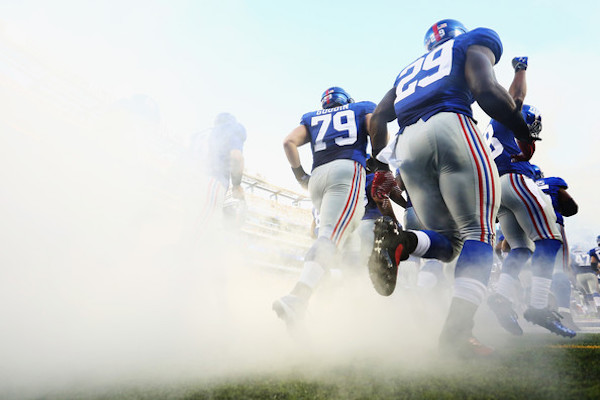 The sight of the stadium, the smell of the field, the overwhelming feeling of anticipation and joy of the game that draws ever closer to commencing. These are the emotions that a football fan has while awaiting their favorite teams upcoming game. As diehard New York Giants fans we envision and feel all of these attributes as well, but through a Giants fans eyes we perceive the endless rows of blue and white jerseys, and see the proud symbol of our team all around us. We paint our faces and scream words of encouragement to this Giants team in which we love. The fans that are present each and every Sunday, rather it be in person or while watching from which ever sanctuary that they choose. No matter the outcome rather win or lose, these fans will never stop supporting their mighty Giants. These fans like me bleed blue. These are the people that will never leave this team and the Giants will always have their hearts.

Every Sunday a team of strong athletic warriors dressed in their uniforms of blue and white with the logo NY etched on their helmets take the field in the hopes of an awe-inspiring victory. The logo of this great team full of such amazing talent also represents the great state in which I live. Although true Giants fans don’t always come from New York, they can come from any state across this great nation, as long as they wear the symbol of their Giants team and are present to route for this team that they love, they bleed blue.

These fans are the fans that they Giants play their hearts out for each and every week. You are the fans that the Giants never want to disappoint, and when they do they feel great remorse for it. As fans we know that every single game won’t be a win, and every season may not be a playoff season. Even when the Giants season ended on week 17, just as it has for the last few seasons us loyal diehard fans are unaffected  by the Giants season ending so soon. Not because we don’t care, but because we are already preparing for out next season. With the high hopes that they next season will be the season when we see out mighty warriors dressed in blue and white hold that Lombardi Trophy high above their heads! The definition of insanity is the act of doing the same thing over and over again but expecting a different result. So is it insane to love the Giants and to cheer for them even when they lose weeks in a row? I say absolutely not! I don’t call it insanity I call it bleeding blue!

Bleeding Blue was written by Guest blogger Mandy Moses Please leave feedback in the comment field below, I would love to know what you think.