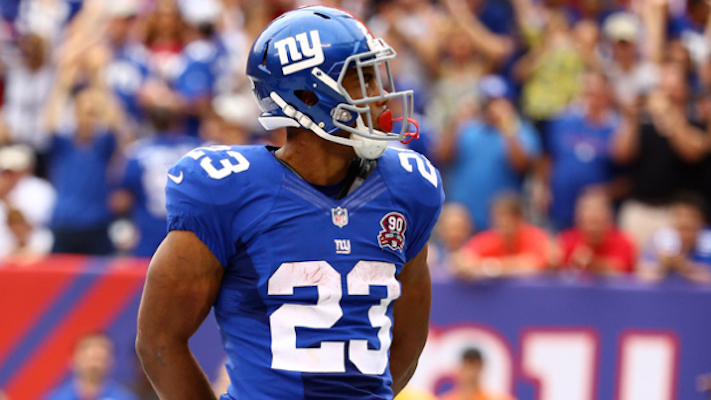 In the 31-21 defeat at the hands of Tony Romo and the Dallas Cowboys, the New York Giants could not get out of their own way. Penalties plagued the offensive line, as there where several times where drives were stalled because of holding penalties and false starts. Tight end Larry Donnell, who is usually sure handed, lost a fumble deep in the Giants’ own territory with less than 5 minutes left with the Giants down by a touchdown, which resulted in a game-clinching field goal by Dan Bailey. Finally, the offensive line could not open up any holes for the running game, as Andre Williams only averaged 2.8 yards per carry. This game was a huge loss for the Giants, and the impact that injuries have had thus far to the offense played a role in this, and every other game they have played. Through seven games, the Giants’ offense has been ravaged by injuries to essential players.

Before Rashad Jennings sprained his MCL in week five against Atlanta, the Giants were rolling. They had won three straight games, and Jennings was a huge reason why. He gained 286 rushing yards in their three wins, converting numerous short yardage situations and gaining crucial yardage on first downs to limit third-and-long situations. But, since then, they have not been able to establish the run game at all, only gaining 190 total rushing yards in the losses at Philadelphia and Dallas with Andre Williams rushing 35 times for 110 yards as the primary back.
Williams has not come nearly as close to the 5.0 yards per carry on 1st and 10 situations, which have led to more third-and-longs. Jennings’ presence gave the offense a different dimension that they have not found since his injury. Although the Giants have a bye this week, and head coach Tom Coughlin has said that the Giants hope Jennings will return to action after the bye, he is no lock to be ready when they return to play the Colts on November 3.

When Victor Cruz went down against the Eagles and was placed on season-ending injured reserve, the offense lost a huge dimension. His presence on the field not only gives Eli Manning a security blanket, but also draws defenses towards him thus opening up holes for other receivers and tight ends. Although the passing offense played very well against Dallas, his absence will be felt in games to come. He will be impossible to replace in the offense and it will be even harder for the Giants to turn around the season than it already is with him sidelined.

The offensive line, which looked like it was emerging as one of the best units in the NFL during the Giants’ three game winning streak, has not played well the past two weeks. Against Philadelphia, they allowed 8 sacks and gave Eli no time in the pocket to throw. Against Dallas, they could not open holes for the run game. The line needs some kind of boost to return to the success they had during their winning streak. This unit has been without big free agent acquisition guard Geoff Schwartz for all seven games because of a toe injury that he suffered before the season started. Schwartz is a solid guard who can move around on the interior line as needed. He is a type of linemen they have severely lacked thus far: a gritty, powerful bruiser who specializes in run blocking. Because he was placed on short-term injured reserve with destination to return, he is eligible to play in their next game after the bye against the Colts. However, according to Coughlin, “Schwartz has a long way to go” before he is ready to play and as of now it seems unlikely he will be able to go.

The injuries to key players on the offense have already hurt the Giants in both the passing and running phases, and the health of players returning from injury will go a long way in defining the success of the offense, and the team as a whole.

Recap Of The Giants & Ravens Week 16

Just some numbers to think about 🤔 https://t.co/P1W5LYr8ow