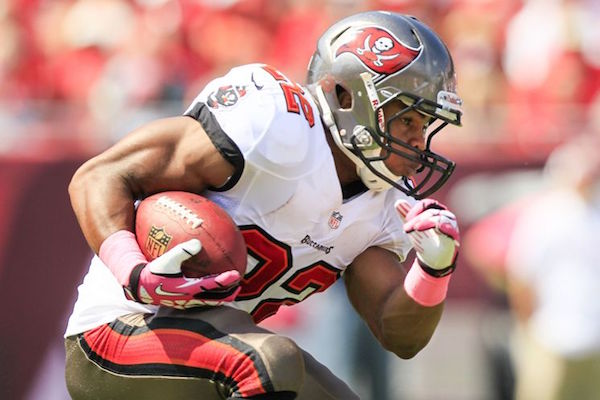 As the NFL trading deadline draws near ( Tuesday, Oct. 28 at 4 p.m. ET) questions Giants fans ask will Jerry Resse make any moves? Let’s take a look out there and see who is being shopped.

Tampa Bay is looking to unload big names RB Doug Martin & WR Vincent Jackson. Along with their big names come some fat contracts as well. After a 1-6 start under new head coach Lovie Smith, Tampa bay might be looking into a new direction.

While rumors have The Patriots most likely a front runner for a Doug Martin addition, our Giants might be in the mix considering how we are thin at running back. Martin was selected #31 in the 2013 NFL draft one pick before the Giants were able to select now retired running back David Wilson. It is believed that Jerry Reese would have selected Martin if available.

It’s a tough trade to cobble together. The 25-year-old Martin is a former first-round pick and Tampa Bay still could use his services this season, then attempt to deal him for similar compensation after it is completed. One reason Martin is considered expendable is that, starting next week, rookie third-round pick Charles Sims is eligible to come off the injured-reserved designated-to-return list. Adam Schefter added

Trades before deadlines are rare in the NFL. I’m still shocked from last years seasons move to bring in linebacker Jon Beason. The only thing that shows you is that Jerry Resse is willing to make a deal if the terms are favorable.

Our guess is that nothing will happen. The unsaid Motto for the Giants is to get younger, faster and healthier.