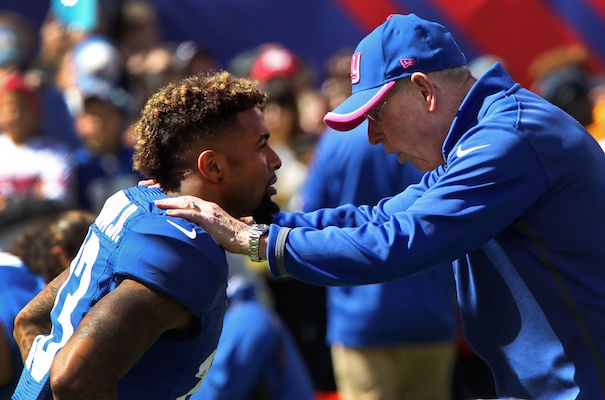 Its week 9 after the bye, the half way point of the season. Where do the NY Giants Playoff chance stand now?

The last blog I wrote (Dream A Little NY Giants Dream With Me) I was talking how similar this team was to the times they had Super bowl runs. How times have changed, after 2 division losses people are talking like the sky is falling. The mood has changed……

Well I ask you to read this with an open mind so maybe just maybe I can help you turn the fan depression of thinking you are going to have to deal with another dismal season to a hopeful feeling of a possible playoff run where anything can happen.

This is what I am thinking:

The bye week came at a great time for the Giants. They dealt with major injuries to key people (Cruz, Beason) so they have to figure a plan to deal with those injuries. They had a couple of division losses in a row so now they settle down and work on that confidence. (especially that offensive line). Players that have been dealing with nagging injuries are getting healthier without hurting the Giants on the field such DRC, Schwartz, Jennings (I know he wont be back this week but he is getting there).

All those things helped the Giants get back on a solid ground but they also gained ground in the division by watching the Cowboys and Eagles lose this past week.

Giants schedule that is left:

Now there are 9 games left.

Lets break down what they have left, 3 games are against teams that are at the bottom of the league (Jaguars, Titans, Rams). These games should be wins. (if they are not you will see what I write about the Giants then)

They still have 3 division games that will all be played at home which mean they have a chance to control where they end up in the division.

The true test of the season will be these next 3 games against some good teams (Colts, Seahawks, 49ers). But wait why cant the Giants beat these teams. Two of the games (Colts, 49ers) are at home and yes they are good but not unbeatable. Yes they play the Seahawks at Seattle but this team is not the same without Percy Harvin hence they lost to the Rams.

So here is what I figure if the Giants can get to 10 wins they have a good chance at being in the playoffs that means they can maybe lose just 2 more games.

Like Aaron Rodgers said, RELAX. I know what everyone is thinking. There is no chance they are getting to 10 wins.

But lets breakdown the team to see if they could get to 10:

OFFENSIVE SIDE OF THE BALL: Cruz was a huge lost but I think Odell Beckham could be the answer because I know people might not like to hear this but he is more dynamic than Cruz. Also going by what was going on in this season he has better hands. Wrs are a thin group and I don’t know if they can take any other loss to that group. (lets hope that doesn’t happen) I think they can get by with our LSU receiving group.

Geoff Schwartz is coming back in the near future. This was supposed to be our best offensive lineman and one of our best free agent signings. (I don’t see how he can hurt). I am pretty sure he will replace the inconsistent RG John Jerry. The offensive line is growing and learning. (they will get better)

Rashad Jennings, which I would say was the offensive MVP before he got hurt. He will probably be back by week 10 this will help the running game (no offense Andre William, I still think you will be a star) but this will help the passing game as well because he knows how to block and can be a threat which Peyton Hillis is not.

The Giants are still learning the Ben Mcadoo’s offensive system. Just trust me they have not reached the potential of this offense yet.

Defensive side of the ball:

This will sound bad but I wish it wasn’t true but it is. Jon Beason going out for the season will help the Giants. Yes he was amazing for the Giants last year but this year he got hurt and he kept trying to play through it. He was not the same player, which I think was hurting the Giants. The Giants from what I hear are going to go back to using 2 LBs (probably Mcclain and Williams) and going with a 3 safety look which I think can help. Giants liked using this kind of defense in their last Super Bowl run. Stevie Brown gets back on the field where he might not be back up to his top speed since before the injury last year but I am sure he will be playing faster than what Beason was playing.

The rumors are they plan on using Damonte Moore more. (which is what they should have been doing the whole time). I am a fan of Mathias Kiawanuka but Moore is the future and is on the upswing of his career while Mathias is on the down swing.
The Giants need a better pass rush and that is what Moore specializes in.

DRC gets healthy which is needed for the banged up secondary, which can make them better because he has been working through injuries as well.

Not much will change I just hope they play better, meaning COVER kicks.

I am trying to take the positive road and I hope you are following me down that road. Now I calmed down with the Super Bowl talk (but I haven’t given up on it). All I hope is for the Giants to give themselves an opportunity to be special.

I am not talking about the impossible and it may not be probable but there is a chance.

As a fan that’s all I can ask and why can’t the Giants make the playoffs?