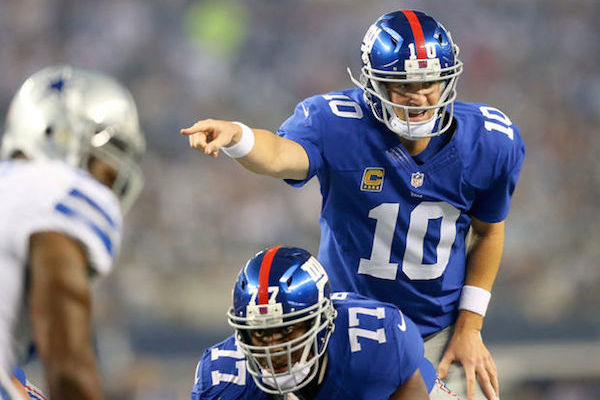 We reached out to Cowboysblog.net to help us break down this divisional game. You can find them on twitter @Cowboysblognet and tweet “I told you so” when the Giants win, If the Giants win… I hope the Giants win. Lets get to it Cowboys vs Giants this can get ugly!

The Cowboys were a team without an identity for several years, but this year everything has come together and the Cowboys are a run first team, and they have been able to run the ball on some pretty good defenses in this league. If the Cowboys can run the ball against a J.J. Watt led defensive line and against the Seattle Seahawks then they’ll be able to run on the Giants #17 run defense as well. In years past the Cowboys offensive line was a little too finesse, but under Bill Callahan’s watch they have become very physical at the point of attack and at the second level. The Cowboys will blow up a defensive lineman off the ball and smash a linebacker out of the way, which has opened up some nice running lanes for DeMarco Murray. Ultimately, the Cowboys offensive line will be too much for the Giants to handle and this will be more prevelant as the game wears on. This game will be won or lost in the trenches, and the Cowboys are forcing a lot of good defense to eat the run.

The Cowboys defense is not racking up sacks, but the Cowboys are still being pressure and flushing out the  quarterback in every game, causing some bad passes and forcing some interceptions. We all know Eli Manning is not the most mobile QB and he’ll turn the ball over in the passing game too. The Cowboys will have a nice gameplan in place against the Giants and it’ll come from Rod Marinelli. He knows what  Giants offensive coordinator Ben Macadoo likes to run and he knows what the west coast offense can and cannot do against the Cowboys. Marinelli has seen this offense for a good part of his career when he was the head coach in Detroit and the defensive coordinator in Chicago. In previous years the Giants had a really good offensive line, but those days are over, and the Cowboys will be bringing the pressure in waves from up the middle with Henry Melton leading the way there. This should be a game where the Cowboys actuall record a multiple sack game. Expect Melton and Crawford to be menacing Eli all game. The Cowboys corners will be able to manage the Giants depleted wide receivers corps as well. Brandon Carr and Orlando Scandrick are playing some Pro Bowl caliber football right now and Sterling Moore is the #3 who has been an upgrade to Claiborne.

The Cowboys will have the Giants on their heels with the running game, but like in most of the Cowboys games, the Cowboys will get you in the passing game as well. The Giants are in the bottom quarter of the league (#24) in pass defense and the Cowboys will exploit this with their various weapons. Dez Bryant hasn’t had a big explosive game this year, and I think this will be the game he reminds everyone why he is one of the best in the league. The emergence of Terrance Williams at the #2 WR should keep the secondary honest, because if Dez is getting double or triple teamed, then Williams will be getting the first downs. If the Cowboys can’t get the ball down the field to Dez or Terrance due to some pass rush on Parnell’s side of the line, I expect the Cowboys to go with some more intermediate passes and that means more Witten and Escobar. Cole Beasley could have a bigger role in this game. Lance Dunbar on the screen will get a few looks as well.

Now for the Gmen.

Lets look at Eli Manning’s stats this year wins vs losses. In 3 Giants wins Manning completing 70.1% of his passes for 734 yards and 8 touchdown throws. He was efficient with the ball only surrendering 1 pick with a QB rating of 11.5.2. We can even throw a magical unicorn QB rushing touchdown in there. In the 3 Giants losses, Manning completed 60% of his passes for 591 yards and 3 passing TD’s. In those losses he was not so efficient giving back 4 interceptions with a 70.9 passer rating.It’s no stretch to say of the quarterback plays well we have a good shot at this game. Fortunately Eli plays well in big games and also owns a pretty good record in Jerry Word at 4-1 since it has opened.

After a string of 3 very well played games, our O-line took a big step backward as they looked poor allowing eight sacks vs the Eagles defenders. Blocking for the run was also poor also providing minimal holes for Andre Williams to run.  They need to protect Eli, they need to create some running space. Expect them to brush the dirt off, and play some ball. Oline hold up Eli Stays clean and Andre Williams will blast some long runs.

Look for a focused and motivated New York Giants to show. I hate the stupid sports clichés but this is a must win game. Funny how a week 7 game can make or break your season.  Defensive end Mathias Kiwanuka knows what is needed to salvage this season.

“This is something we are going to have to grow up from real quick and make sure we get the ship right. The story about the season has not been written yet, and I feel like as long as we come back out this week ready, prepared and enthusiastic about getting a win, then we will change that perception of us.”

The Cowboys have looked great but for some reason I don’t buy it. I’m waiting for the game when they aren’t clicking on all cylinders. I just hope its against our Gmen.

[…] We did a piece in conjunction with BleedBigBlue , a solid NY Giants blog. Together we both cover why the Cowboys will win today and why the Giants will win the game. Be sure to check out the article here. […]