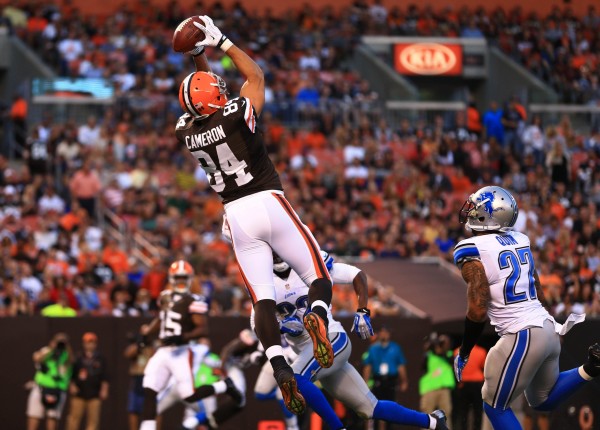 Jordan Cameron Would Be Perfect Fit For Giants

The NFL is quickly evolving and one position that has become more and more important is the tight end.

After week three of the 2014 season, the Giants thought they had their star tight end in Larry Donnell who caught three touchdowns passes from Eli Manning against the Washington Redskins. Unfortunately, the Giants discovered throughout the season that Donnell was raw and often inconsistent.

Although Donnell had a solid stat line with 63 receptions, 623 yards, and 6 touchdowns, the 26 year-old tight end struggled holding onto the football recording four fumbles.  He also was very inconsistent as a blocker in the run game. Donnell still has the intangibles to be one of the top tight ends in the league, but will certainly be a project. This is why the Giants should look to add a tight end in free agency.

A perfect fit would be former Cleveland Brown Jordan Cameron. According to recent reports from Jason La Canfora of CBS, the impending free agent has no interest in returning to Cleveland. Cameron, who was selected to the Pro Bowl in 2013, saw his numbers dip this season due to multiple concussions and the horrendous play of quarterbacks Bryan Hoyer and Johnny Manziel.

If the Giants target Cameron in March, a one-year deal would make sense for both sides. The Giants would add another weapon for Eli Manning to go along with Victor Cruz, Rashad Jennings, Ruben Randle, and Odell Beckham Jr, while Cameron will get the chance to perform better in a contract year with an explosive offense.