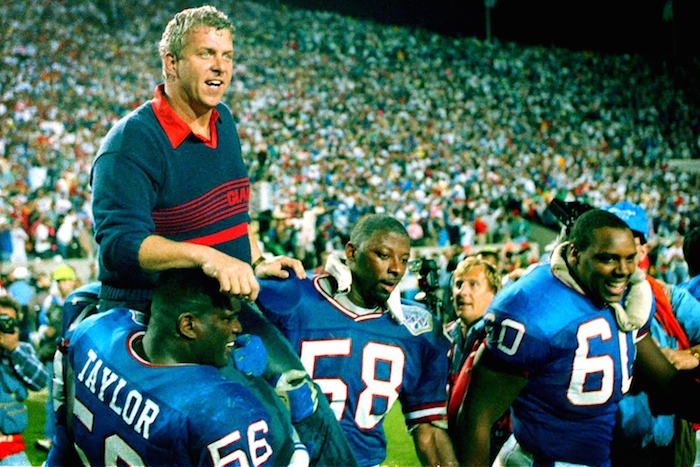 My All Time NY Giants Team

I was recently asked by our fearless leader Marco here at Bleed Big Blue to put together my All Time Giants team.  That leaves a lot of room for debate among anyone who Bleeds Big Blue, I mean we are a pretty passionate bunch to say the least.  So I decided to stay true to myself.  This is my All-Time Giants Team right?  I’m pretty sure every fan of every team has an all time greatest team. So you make yours, but this my friends, is mine.

Lets start with this…

Got chills?…We all have a passion for this team and the memories they have brought us.  No matter your age, if you are a fan, you have an idea in your head of who the greatest players in said teams franchise history are…Let the debate rage on….

Coach – Bill Parcells – Coughlin gets a lot of consideration, but let’s not forget who taught him.

QB – Phil Simms – I know all about Eli, but I’m a Simms guy, and I still say if he had as many WR’s to throw to as Eli, or even Kerri Collins for that matter, Simms might have a Bust in Canton. The other thing is, with the personalities I have on this team, I need a QB who isn’t afraid to grab a guy by the face mask and curse him out every now and again. #22of25

Back-Up QB – Eli Manning – This is probably the area of the team where I will be most criticized,  Eli is in the midst of probably, if not already, becoming the Giants greatest QB of all time.  He handles himself  with class and I’m proud that he is the face of this franchise today.  He is the only Giants QB with two Super Bowl MVP’s and has accounted for some of the most memorable plays of our history of our storied franchise,  and in only the last decade…I get the argument here….but again, I’m a Simms guy.

RB – Tiki Barber –  I have a genuine dislike for Tiki Barber, but hard to argue with what he did on the field.  The numbers speak for themselves…We forget how good he was.

3rd Down RB – David Meggett – Frank Gifford got some consideration here but I took points away from Gifford for marrying Kathy Lee.

FB – Maurice Carthon – The definition of a full back.

WR – Homer Jones – Jones finished his career with 224 receptions for 4,986 yards, an average of 22.3 yards per catch, and 38 touchdowns (36 receiving, one rushing, one kick return). His yard per catch ranks number one for all N.F.L. players in a career with at least 200 receptions. Homer Jones also was the first player to “spike” the ball after a TD.  BooYah!

WR – Armani Toomer – Toomer was Mr. Dependable for a long time for Big Blue, and made clutch catch after clutch catch through out his career.

WR – Victor Cruz – Hard to leave this salsa dancer off the list…his age and talent can move him to the top of this list in years to come.

4th WR in my Sub packages — Plaxico Burress – I  know…he shot himself and more than likely cost us back to back titles…but try winning in 2007 without this beast.

TE’s – Mark Bavaro and Howard Cross – It’s fucking Rambo…enough said. And Cross to block in 2 TE’s sets…phenomenal run blocker, who had good hands that he wasn’t asked to use much.

LG – Brad Benson – Versatile linemen that can play any spot on the line at an All-Pro level.

C – Bart Oates – Smart, tough and dependable. Edges out Mel Hein because of his rapport with Simms.

RG – Chris Snee – For a decade he’s been a force on the line…and has 2 rings to show for it.

RT – Roosevelt Brown – Hall of Famer and the anchor for the Championship Giants teams of yesteryear.

LE – Michael Strahan – Played the run as good as he rushed the passer, and after years of disappointments, won a ring in his final game.

DT – Roosevelt Grier – This big defensive tackle is a 2-time Pro Bowler and was a first-team All-Pro with 1956 NFL champs… He is drafted in the third round out of Penn State… Rosey makes 5 playoff appearances and wins one title.

DT –  Jim Burt – Can still see him climbing into the stands after the Super Bowl 21 victory over the Broncos.

DE – George Martin – Any Giants fan my age remembers Mr. Martin picking off a pass to the flat by John Elway and chugging 60 yards for a TD, only to be tackled by Lawrence Taylor. One of the defining plays of the Super Bowl season of 1986.

DE – Jason Pierre-Paul – As long as JPP keeps his head on straight and can stay healthy, he’s on the team. We don’t win the division in 2011 without him.

DE – Leonard Marshall- Marshall sent Joe Montana to the sidelines in the 1990 NFC championship with what is still one of the most vicious hits ever seen. I think he’s still bouncing up and down on the Candlesticks sideline screaming “A minute away from Tampa Bay“.

DT – Keith Hamilton – The Hammer, was a monster on the D-line and enjoyed punishing opposing offenses.

OLB – Lawrence Taylor – #TheG.O.A.T. #GreatestOfAllTime,  Which leads me to my next point, kids, don’t smoke crack.

ILB – Harry Carson – Hall of Famer and a leader among Giants.

ILB – Antoni0 Pierce – Sideline to sideline defender who loves blowing up screens and taking on 3 blockers at a time.  One of the biggest plays in Giants history.

OLB – Carl Banks – If he wasn’t in LT’s shadow, Banks would be talked about a lot more often for how great of a player he was.

CB – Jason Sehorn – Stop shaking your head.  Before Jim Fassel put Sehorn back to return kicks (#moron), Jason was on the fast track to becoming the best corner in the league.  Rare combination of size, speed and intelligence.  Could have been one of the great ones if not for an ill fated preseason kick-off return against the Jets.

CB – Corey Webster – He fell off of lately, but the runs he had during the playoffs in 2007 and 2011 helped the Giants hoist the Lombardi Torphy.

FS – Antrel Rolle – Leader of men.  All he wants to do “at the end of the day” is win, and will do whatever is asked of him to accomplish that goal.

SS -Greg Jackson – Unheralded but always seemed to be in the right place at the right time, also wasn’t afraid to knock a WR’s head off coming over the middle.

Punter – Sean Landeta – No questions about this one. Hopefully he doesn’t miss any punts like in Chicago in “85…still having bad dreams about that one.

Hopefully my selections got you talking, and I know the highlights got you ready for the season to start.