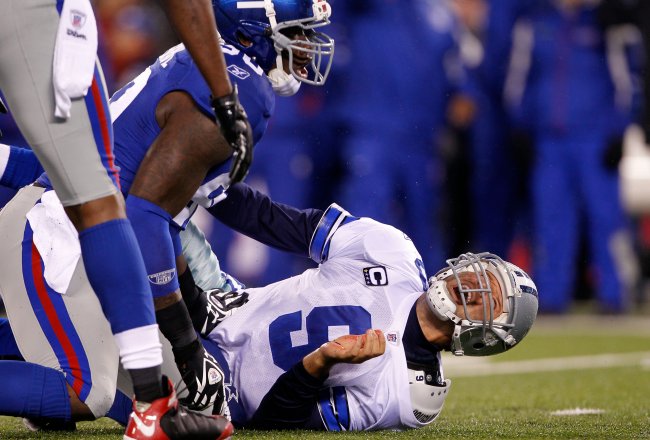 Good morning Giants fans. Here we go. No more preseason. No more talk. No more waiting. Its time to play, for real.

Another opening night. Another battle with the Boys from Big D. Another night of TV cameras finding Jerry Jones and that pretentious look on his face when Romo is flat on his back or when he has just thrown another 4th quarter interception.

I read something Friday that put a GIANT sized smile on my face, get this.

“The Dallas Cowboys owner and general manager said Friday morning that NBA superstars LeBron James and Chris Paul and New Jersey Gov. Chris Christie will all be in attendance when the Cowboys host the New York Giants to open their season.” JON MACHOTA – FOX SPORTS WEST.

Perfect!! Throw a party Jerry. Invite them all.

Invite Lebron James, the greatest NBA player in the world and talk about him playing Tight End for the Cowboys in whatever imaginary world your head dwells in.

Invite Chris Paul, the best point guard in the NBA and get all the information you can out of him about his State Farm Insurance “Born to Assist” campaign, and take out a life insurance policy on Romo before kick-off.

Invite the Governor of New Jersey, Chris Christie, who is leading the screams of “JERSEY STRONG” to the people of his state as they continue to recover from the tragic events of Hurricane Sandy, only to fly to Dallas and to cheer against the best team he has playing in his state.  Governor Christie should change his name to Governor Disgracia.

Order all the food Jerry. Put the champagne on ice. Gloat about your team and the stadium. Do whatever you need to do to assure the cameras will be on your face throughout the entire game. As Giants fans, we love this. Any chance to see that look on your face when things go wrong Jerry makes us sleep like babies.

You know why Jerry does this? Think about it. He makes spectacles when he assumes a victory is all in but in the bag. Jerry has a tendency to get ahead of himself, to put the cart before the horse so to speak. How bad do you think Jerry wants this game? Four games against the Giants in their new stadium. Four losses and an Eli Manning autograph in the visiting locker room to show for it. Jerry thinks he has this one. That the time on our winning streak in Dallas has run out. That Monte Kiffen running his defense and Romo taking more of a leadership role on offense has given Jerry the right to make this a Cowboys coming out party. Jerry thinks they will blow us out and the cameras will catch him laughing it up all night with his guests. Be careful Jerry, cause sometimes when you throw a party you don’t expect the forecast to call for rain

And tonight, because you always make yourself bigger than your team and the game they are playing in, there is a BIG BLUE storm coming your way. Call it cloudy with a chance of JPP.

Are the Giants banged up Jerry? Yep!  Are there huge question marks surrounding our boys in BLUE this year Jerry? Yep! Do you wanna do karate in the garage Jerry? … Sorry, went all Step Brothers on ya there…

Here’s the thing, everyone wants to talk about Romo and Dez Bryant. Miles Austin and Jason Witten. Demarco Murray and Demarcus Ware.

Well we have players too Jerry, Eli and Cruz. Nicks and Randle. Wilson and JPP. (who I think will play)

Each team has a tremendous amount of talent at the skill positions. Can’t take that away from either of them, but this is Giants vs. Cowboys and these games usually come down to who is more physical and who is more motivated. And I think our Giants are ready for this fight. Why? Because no one thinks they are and Jerry throwing a party and putting his Cowboys boots in his mouth usually gets the Gmen going.

When I think about Jerry’s GIANTS envy three times specifically come to mind.

1. Remember when he invited all the Cowboys fans to the new stadium to kick the Giants “asses”? How’d that turn out?
2. Printing the NFC championship game tickets in 2007 before divisional round against the GIANTS was even kicked off? How’d that go Jerry?
3. Taking the attention away from Phil Simms the night his number was retired and walking onto the field during the ceremony with NIKE head Phil Knight. Stay classy Jerry.

And now this…a party at the House that Choking built for opening night. You would think after all the big losses and collapses over the years, after all the hype surrounding this Cowboys team every year that the owner/general manager would set the tone and learn his lesson. You would think Jerry would let his team do the playing and talking on the field, but honestly, don’t we all know better by now? He can’t help it and that’s why the Big Blue Bullies will show up looking to turn the party into a funeral.

The Cowboys offensive line has just as many questions mark as we do.
Blitz them for 4 quarters. Send defenders early and often with the intention of punishing Romo.

It’s time to get that Big Blue Swagger back and that comes with running the football and maiming the QB.

They will try to run Demarco Murray. We will counter with a quality rotation of defensive linemen. Jenkins, Joseph, Rodgers, Hankins and Patterson.

They will try to light up the Dallas sky through the air with Romo, Bryant, Austin and Witten. We will pummel Romo with JPP, Tuck, Kiwi and Moore.

They will employ a new Tampa 2 Defense under Monte Kiffen with lineman stunting left and right.  David Wilson will shred it.

They will drop those safeties back in that Tampa 2 scheme to prevent any long TD’s that can lead to excessive Salsa dancing and Eli will dissect it to Cruz and Nicks and Randle. Expect some Brandon Myers in the wide open middle of the defense as well.

So many questions will begin to be answered tonight.

How bad does the loss of Stevie Brown hurt us?  How will the linebackers play?  Can Pugh be effective at the right tackle spot? Is Hakeem Nicks back to being Hakeem Nicks? Can Justin Tuck be Justin Tuck again?  What does Terrell Thomas have left? Is Prince Amukamara ready to be King of the secondary?  And my favorite Giants question heading into tonight…

Can David Wilson carry a full load with no Andre Brown? Check out Wilson’s answer to Kim Jones and Carl Banks during an interview on WFAN NY and let us hope the whole team shares his philosophy,  “I’m a competitor, so I don’t go in looking for a way out.”

This Sunday in Dallas, there is no way out. Cue the Rocky 4 music.

No easy way out, no short cuts home.

There is a party tonight in Dallas, someone should let Jerry Jones know that the party crashers have stolen an invitation and are coming to ruin the festivities. Remember, there have been 4 parties in Dallas before, and so far,  these Big Blue party crashers are the only ones who have left this stadium with a smile on their faces and their party hats on.

GAME TIME JERRY… ARE YOU READY FOR A FIGHT???

PS — Win or lose tonight, this is a long season.  Don’t get to high, don’t get to low. GIANTS fans are smart enough to know this, unlike Cowboys fans who after one win start screaming about a Super Bowl.

Enjoy tonight for what it is.  The start of another season of the game we all love.  Put your jerseys on, your lucky hats and sweats. Sit in that “special” chair we all have.  Have your family and friends around you, I know I’m gonna have a hard time putting my daughter to bed for school tomorrow, she knows who plays tonight….school or Giants??  Well, she can watch the first half with Dad and go to school without a voice tomorrow.

Remember one thing, just like our Hall of Fame coach Bill Parcells said along time ago, “this is a marathon, not a sprint.”