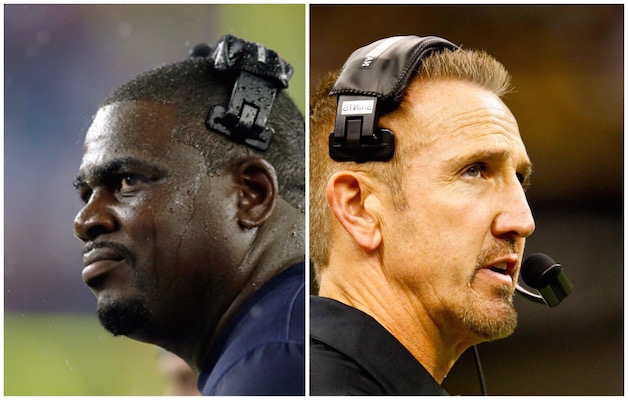 As the search for the Giants defensive coordinator continues, two names from the past emerge as leaders of the pack. I ask you big blue faithful, Pepper Johnson or Steve Spagnuolo?

Johnson has deep roots in our Giants organization. Pepper was a fixture at linebacker from 1986-1992 earning two Super Bowl rings under Head Coach Bill Parcells. Johnson also spent 14 seasons behind  Bill Belichick’s various coaching staffs including New England. Currently he is the defensive line coach for the Buffalo Bills.

Spagnuolo is also part of Giants royalty as the Superbowl winning defensive coordinator in 2007-08 until taking a head coaching position in St Louis in 2009. Since his release form the Rams Spagnuolo and a quick stint with the saints and currently resides as the Ravens’ defensive backs coach.

Raven Head Coach Jim Harbaugh has granted permission for the Giants to interview Spagnuolo and had the following to say.

Steve is a great coach. He’s done a great job with the guys throughout the course of the season. Obviously, a tremendously experienced coach. He’s been a head coach, he’s been a coordinator and that’s not something that we would want to hold him back from as an opportunity. I don’t know what’s going to happen with that, but that’s something he deserves an opportunity to look at.

Former Giants defensive end Osi Umenyiora opinion in the Spagnuolo may be the man for the job.

I never have really met anyone quite like him in regards to what he was able to do and the things he would do on the fly. It was crazy. You’d come in with a game plan and something wouldn’t be going right or something we were doing was getting shredded, and he’d literally — right there on the sideline — come up with something different.

He has a great knowledge of defense, he’s a great teacher — I’m not telling you that that’s who they should pick — I think they should interview him, and I think if he gets interviewed, then they’ll have an idea whether or not he’s someone that can lead the Giants’ defense back to where it needs to be. He’ll make a good account for himself.”

Once A Giant Always A Giants. Once again who would you choose Pepper Johnson or Steve Spagnuolo?