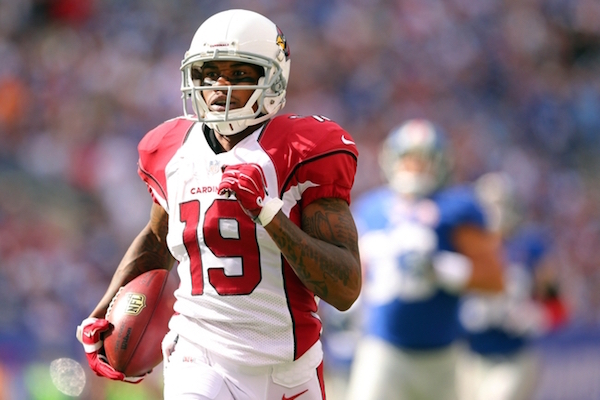 Ted Ginn Jr. Would Be A Nice Fit For Giants

One area the Giants have struggled with over the years is the return game. The Giants have tried the likes of Ruben Randle, Da’Rel Scott, Quinton Demps, and many others who have not worked out. The Giants should look to add a returner that is reliable like Domenik Hixon was for many years with the Giants.

One name that fits the mold would be Ted Ginn Jr, who was recently released by the Arizona Cardinals.

Ginn, who returned a punt for a 71-yard touchdown against the Giants in week 3 this past season, has been one of the most dynamic returners in the league throughout his career. The former No. 9 overall pick in the 2007 NFL draft by the Miami Dolphins, had a poor year with the Cardinals but still averaged 10.7 yards on punt returns which was good for 9th in the league. Ginn shares the record for kickoff returns for touchdowns of 100 yards or more in a single game. He has returned 3 kickoffs for touchdowns and 3 punts for touchdowns in his career.

Also, the Giants experimented by using star wide receiver Odell Beckham Jr. as a punt returner last year, which was not the best idea. Beckham, who struggled with hamstring injuries, is vital to the Giants success and is not worth putting being put out as a punt returner, which could increase the risk of injury. With Victor Cruz not being 100% healthy, the Giants will need Beckham to stay healthy in order to find success in the 2015 season.

The Giants must make an effort to get an established veteran who can both return kicks and punts. Ginn will most likely come at a cheap price and would give the Giants a proven veteran who has had lots of success in the return game throughout his career.