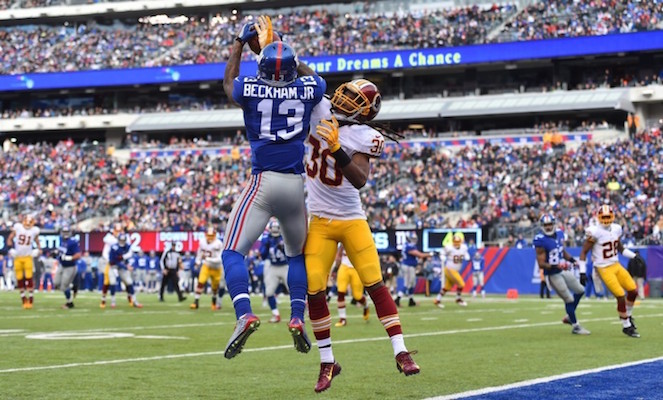 The Giants Look To Rebound Against Washington

It’s week three and yes it’s a must win for the Giants. While many are close to giving up on the season not all hope is lost. Today we will bring both sides of this rivalry.  Covering the Redskins is Steve Shoup of Fanspeak.com (take a look at the amazing NFL Draft Simulator they put together).

1. Redskins rushing attack gives them an edge:
With the addition of Bill Callahan as the new offensive line coach this offseason the Redskins rushing attack has taken off this season and through two games they lead the NFL in rushing with 343 yards. They are averaging 171.5 yards a game, which is up considerably from last season. While that 171 number might not be sustainable, the Redskins clearly want to run the football and have found success versus two talented front sevens this season.
The Giants have done a great job limiting the run so far this season allowing just 135 yards and a 3.0 yard per carry average. They face a tough test though with the two-headed monster of Alfred Morris and rookie Matt Jones running behind Callahan’s play calling and a revamped offensive line.
This will be the key battle of the game, and it’s likely whoever wins this battle will come away with the victory this week.
2. Fully intact Redskins cornerback depth chart:
In their first two games the Redskins were missing one of their top corners due to suspension. Second year pro Bashaud Breeland missed week one and free agent pick-up Chris Culliver was out week two. Now both are back and join DeAngelo Hall to give the Redskins a pretty solid CB trio.
They of course have their hands full with Odell Beckham Jr. who is among the elite receivers in the league. While none of Breeland, Culliver or Hall can match-up 1-on-1 and slow down Beckham, the corner depth means that the Redskins can trust their other corners to do their job to double-team Beckham more often.
Even if Beckham has a good day, if the Redskins shut down the rest of the Giants passing targets, they could do enough to secure the victory.
3. Redskins pass rush vs the Giants offensive line:
The Redskins pass rush has only produced 4 sacks in two games, but they’ve been more effective than just their raw sack numbers. Washington has generated consistent pressure and has forced a number of poor throws by opposing quarterbacks.
The Redskins will look to do the same thing this week as Eli Manning historically doesn’t take a lot of sacks,but he has been known to make some poor decisions when under pressure. The Giants offensive line was a trouble spot heading into this season and with first round pick OT Ereck Flowers banged up, they could be down one of their key players (or at the very least have him at less than 100%).
The Redskins are in a position to capitalize if the Giants line is less than 100% as they bolstered their pass rush this offseason. In addition to returning star OLB Ryan Kerrigan and DL Jason Hatcher, the Redskins added DL Stephen Paea and 2nd rd pick OLB Preston Smith. Paea like Hatcher generates a lot of interior pressure, while Kerrigan and Smith attack from the edges.
Kerrigan is of course the star of the pass rush, but Hatcher has looked great this season as he’s fully healthy (he was on the injury report as a DNP, but it appears to be just a rest day). Smith has also been impressive in his pass rushing snaps and he offers legitimate talent off the edge.

1. The time is now.
Stats for teams that are 0-2 and looking to get into the playoffs are very bleak. ESPN dug up some damaging information, since 1990 teams that started 0-2 only have a 12% chance for a playoff berth. That is the bad news.

The good news is that the NFC East is wide open. The Dallas Cowboys are suffering through major injuries to Tony Romo and Dez Bryant. The Redskins are respectably 1-1 and show a solid run attack. Both the Eagles and the Giants share and 0-2 record and with just one win they are thrown back into the mix.

Don’t let the 0-2 start fool you, both games were close. One less penalty, fumble, drop, or meltdown and the GMen could be 2-0.

2. The return of Jon Beason
Giants vet middle linebacker Jon Beason will make his season debut in coach Steve Spagnuolo’s defense. Benson who looked sharp in pre season was missed on some key plays over the past two games. His leadership and communication should help the Giants defense get off the field. The Giants have held up well defending the run with an average of 68 yards per game (3rd best in the NFL). Branson clogging up the middle will also close up some cheap dump off routes. The Redskins are bringing a stout running game but Giants are up for the task.

3. Eli and Odell put together a full game.Count on Eli Manning hooking up with Odell Beckham Jr. early and often. Minus the fumble and minus the meltdown Eli Manning has put together a solid play. He has yet to thrown an interception and is completing 61.8% of his passes.

Manning is looking for another target to open himself up in the passing game. After being slowed down by knee tendinitis Rueben Randle is eager to get involved.

“We’ve got to do a good job of getting Rueben involved some more, get him some catches,” Manning said Monday. “He’s got to be a weapon for us.”

Randle feels getting out there and getting into a groove is key to improved play.

“It’s just about me getting out there and playing fast,” Randle said. “That’s what I want to do. Hopefully this Thursday, I can get back into the groove and make some plays.”

The Giants will look to fire on all cylinders and take out the Redskins early. Hopefully they can hold on to the lead and enjoy the victory.