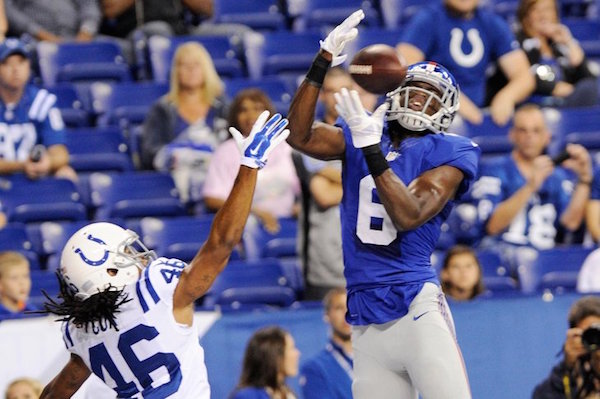 8 Takeaways From The Giants Loss To The Colts

1. Injuries Are Piling Up on Both Sides of the Ball

Prior to the game, the Giants were without arguably their best running back (Rashad Jennings), their best wide receiver (Victor Cruz), their best offensive linemen (Geoff Schwartz), their best linebacker (Jon Beason), and their two best nickel corners (Walter Thurmond III and Trumaine McBride). Week after week it seems that more and more key players are going down with catastrophic injuries. This week was no exception. Emerging star cornerback Prince Amukamara, who is tied for 5th in the NFL and most the team with 3 interceptions, tore his bicep and was placed on injured reserve, effectively ending his season. He was one of the team’s best players on offense and defense and will be nearly impossible to replace. Weston Richburg, who has started each game at left guard, sprained his right ankle towards the end of the game and his status moving forward is unknown. Punter Steve Weatherford has not been the same since his week one injury and had trouble with distance on several punts against the Colts. The compounding injuries are crippling the team and putting more and more pressure on Eli Manning and the offense to force the ball downfield, a trait that devastated the Giants last season.

2. The Secondary is a Liability

The secondary, which was projected to be the team’s strength before the season and potentially one of the best units in the entire league, is now a major weakness as three of the four top corners went down with season-ending injuries. Now at cornerback, the Giants only have Dominique Rodgers-Cromartie, who is fighting a multitude of injuries to his right leg and back, Zack Bowman, who has never seen extended playing time in his entire career and may not play moving forward due to an abdominal injury, Jayron Hosley, who has struggled throughout his career to grasp the defensive system, Chandler Fenner, who was recently promoted from the practice squad, and Chykie Brown, whom the Giants just signed off of the Baltimore Ravens’ practice squad. As they are dangerously thin at corner, teams moving forward will attempt to exploit this huge weakness.

For the third straight week, rookie Andre Williams started at running back. And for the third straight week, he underperformed and the ground game as a whole was terrible. Not coincidentally, the Giants lost all three. Without Rashad Jennings, who has missed the past three losses with a sprained MCL suffered in the Giants’ last victory against Atlanta, they could not establish the ground game at all. As a result, Eli Manning and the offense have had to face numerous third-and-long situations and subsequently could not convert and establish long drives. Against the Colts, Andre Williams only gained 22 yards on 12 carries, resulting in an abysmal 1.8 yards per carry. Their leading rusher on the night was Michael Cox, who had only two carries when the game was out of reach. In order to win, the Giants need Jennings to stabilize the position and bring back the Giants’ ground game that averaged 145 yards per game during the 3 game winning streak. He needs to take the bulk of the carries while Andre Williams takes the back seat and continues to develop his game. The return of Jennings, who averaged 4.4 yards per carry before going down, should alleviate the pressure on Manning and will improve the offense immensely.

Defensively, the secondary looked sluggish and left the middle of the field wide open to be gashed by quarterback Andrew Luck. The linebackers could not cover the Colts’ tight ends Dwayne Allen and Coby Fleener, allowing 8 receptions for 125 yards and 2 touchdowns between them. The back seven for the Giants simply had an awful game. But, the front four conversely played well. Andrew Luck had pressure in his face the whole game and was hit 11 times. Notably, free agent signing defensive end Robert Ayers had a great game. Ayers finished with three tackles, one sack, a forced fumble, and seven quarterback hits. Head coach Tom Coughlin praised Ayers on his play as one of the few bright spots in the game. He has played very well all season in limited playing time, as he has yet to start one game. He is 2nd on the team with three sacks despite playing just over 50% of all defensive snaps. He needs to see the field more, and should take over the starting job from Mathias Kiwanuka opposite Jason Pierre-Paul, who has been ineffective all season.

Rookie wide receiver Odell Beckham Jr. in only his fourth career game shined against the Colts. Possibly the lone bright spot for the offense, he finished with 8 receptions for 156 yards, with an excellent mark of 19.5 yards per reception. He also had a 59 yard reception in the third quarter, the type big play in which the Giants have badly lacked all season. His routes looked extremely sharp and his lightning speed was apparent all game. He also showed great ball skills and leaping ability. He was continually on the same page with Eli Manning, while Rueben Randle continues to have weekly miscommunications with Manning. After missing the first four games of the season, prompting doubts over his potential to live up to the high draft choice, his huge game against the Colts solidifies his place as the Giants best receiver only four games into his career. His future looks as bright as any wide receiver in the league and should continue to shine in weeks to come.

6. Jacquian Williams is Emerging as a Star

The fourth year player out of South Florida has consistently improved each season since being drafted, and is now an emerging star at outside linebacker for the Giants. Against the Colts, he led all players with 18 tackles and also tallied one pass defended. Williams has great size for the position at 6 foot 3 inches, while possessing unheralded speed as well. He was all over the field making tackles on Monday and should continue to be an anchor on the defense. With 69 tackles, he is third in the NFL amongst outside linebackers on the season, and 11th overall. He will continue to improve in pass coverage and emerge as a top outside linebacker in the league.

On the season, the Giants are 5th in the NFL in drops percentage, with 17 drops on 278 targets. On Monday, it was apparent that the receivers needed to step up and make plays in order to come back from the early deficit, but failed to do so. Preston Parker, the third receiver on the depth chart for the time being, dropped four passes before bringing in one reception. Both Rueben Randle and Odell Beckham Jr. both dropped one pass each, with Randle’s drop coming on a key third down. Although Eli Manning did not have a good game, missing high on several throws, his receivers did not give him the opportunity to succeed. The receiving corps has to improve on their poor outing and make plays when Manning puts the ball in a catchable spot. In order for the Giants to win, they need better play from their complementary receivers other than Odell Beckham Jr., and on Monday this was far from the case.

After the game was well out of hand, undrafted rookie Corey Washington caught 4 passes for 48 yards in he fourth quarter, including his first NFL touchdown. Washington made a splash this preseason when he caught four game-winning touchdowns on 10 total receptions. At 6 foot 4, he has the ideal size to be a dominant outside receiver in this league. Scouts have compared him to former Giant Plaxico Burress due to his size, and he displayed similarly great leaping ability and ball skills in limited playing time. His addition to the lineup could permanently move Odell Beckham Jr. into the slot, a position in which he has thrived in college and thus far in his career. The Giants must move him up the depth chart ahead of struggling Preston Parker to give Manning a big red zone threat on the outside along with tight end Larry Donnell. His addition into the rotation would immediately improve the receiving corps and create a formidable group of Beckham Jr., Rueben Randle, and himself.