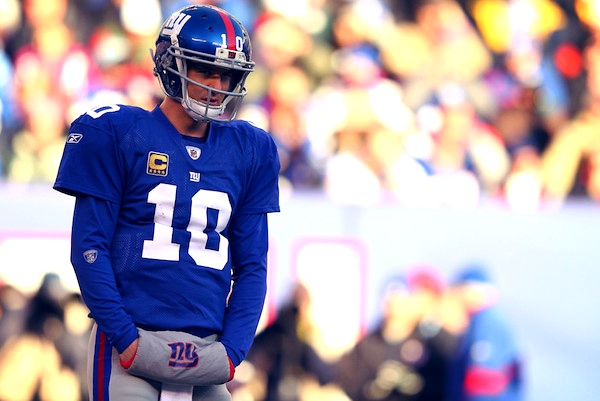 In the season opener, after all of the promised change to the offense and the new acquisitions on defense, the New York Giants lost by 21 points. They were outgained by 220 yards and were drastically outplayed on both sides of the ball. Head coach Tom Coughlin even labeled the game “a nightmare performance.” The offense looked out of sync, with miscommunications between Eli Manning and his receivers similar to the ones that plagued the offense last season. The offensive line was ravaged by the Lions’ defensive line and gave Eli absolutely no time to go through his progressions. In addition, the Giants only converted 23% of their third downs while allowing the Lions to convert 67% of theirs. This disparity meant that the offense could not sustain drives while the defense could not get off the field. To sum up the season opener: the Giants got flat out embarrassed on the national stage. Can the Giants bounce back from a demoralizing week one loss and win their home opener on Sunday against the Arizona Cardinals?

When Ben McAdoo was hired as new offensive coordinator, the New York Giants front office and coaches knew that he was bringing with him a whole new offensive system. In his ten-year career, Eli Manning had never had an offensive coordinator change until this offseason, with Kevin Gilbride running the offense every season since Eli was drafted. Because of this, it would take some time for the offense to gel, and the coaches knew this. However, they had hoped that it would by the beginning of the regular season. Based on the lack of efficiency in week one, it is clear that the offense is a work in progress. But the good news is that with each week, the offense has more time together to mesh. For the most part, aside from 1st round pick wide receiver Odell Beckham Jr. and guard Geoff Schwartz, the offense has not incurred any major injuries. The same group will continue to practice together and develop chemistry. Eli Manning will continue to develop chemistry with his receivers. The question is not if the offense will click, it is when. And the more time the same group of players has to mesh, the faster the time will come. Can that time be this Sunday?

Possibly the lone bright spot in the ugly week one loss was tight end Larry Donnell. Named the starting tight end on the depth chart, Donnell was targeted 8 times and had 5 catches for 56 yards with a touchdown. This touchdown, which was the first of Donnell’s career, was on a fade route in the corner of the end zone where Donnell had single coverage and used his size advantage to leap over the cornerback and haul in the pass at the peak of the flight. One of the biggest question marks coming into the season was who would emerge as the starting tight end, and it seems like Donnell can potentially be a legitimate starting tight end and an offensive weapon. At 6 foot 6, Donnell can be a matchup nightmare for undersized corners if he can use his size and athleticism to his advantage and build off of a strong opening week.

In the season opener, every aspect of the offense struggled. All of the struggles stemmed from the breakdown of the offensive line. It failed to create running lanes and did not give Eli any time in the pocket. If the Giants are to have any success on offense, the offensive line has to improve drastically. But, with three new starters, it is unlikely that that progress will happen anytime soon. Will Beatty was beaten several times and played very poorly returning from injury. He played poorly last season and did not look any better on Monday. Rookie guard Weston Richburg in his first game as a pro had a decent game but faced a daunting task of blocking the fearsome defensive tackles of Detroit. He, along with center J.D. Walton allowed defensive line penetration on multiple occasions and could not get a push on interior rushes. Guard John Jerry did not play well and could be replaced by either Brandon Mosley or newly signed veteran guard Adam Snyder in the starting lineup for the home opener. Tackle Justin Pugh did not play particularly well either. Overall, the Giants offensive line was atrocious and will have to make a huge leap if the Giants hope to win.

After facing a tough Detroit defense in week one, things do not get any easier for Big Blue. The Cardinals held a potent Chargers offense to 290 yards and have a dominant cornerback tandem of Patrick Peterson and Antonio Cromartie. They are strong in all aspects of the defense, especially the secondary. The trio of Peterson, Cromartie, and Tryann Mathieu has the potential to one of the best in the NFL and should cause problems for the Giants’ offense that already struggle moving the ball through the air. If the offense does not take the next step and develop strong chemistry, it will once again be a long day for the Big Blue offense.

Although the offensive woes were heavily publicized after the loss, the Giants’ defense was a huge disappointment. Detroit totaled 341 passing yards and allowed quarterback Matt Stafford a quarterback rating of 125.3. On the Lions’ first touchdown, a 67-yard pass to Calvin Johnson, there was a breakdown in the secondary that allowed Johnson to be wide open several yards behind the defense. This week, they face a tough test in Larry Fitzgerald and Michael Floyd, and they will need to improve in the back. The Giants undoubtedly have the defensive talent to be one of the best defenses in the NFL, but they need to develop better chemistry. Once it meshes, the defense will thrive. However, will they mesh this week?

Verdict: The Cardinals seem to have a distinct advantage on both sides of the ball. The Giants will need immense improvement in the play of the offensive line and secondary in order to win. If these things occur… and it is a BIG if… the Giants can win. But it is very possible that come Monday the Giants will be looking at the second straight 0-2 start to the season.