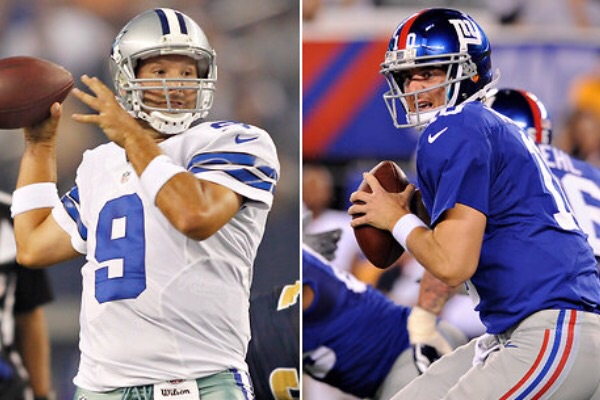 The season is now upon us, and now, the games have meaning. Let’s dig into our favorite rivalry. Joining us once again is Cowboysblog.net. You can find them on twitter @Cowboysblognet. Let’s start!

Cowboys Offense vs Giants Defense
The Giants brought back a familiar face when they hired Steve Spagnuolo as their Defensive Coordinator, but he won’t have the menacing squad they had back when they were winning championships and contending. The Giants will undoubtedly have their hands full with the Cowboys offensive line and aerial attack led by Dez Bryant. If this was two or three seasons ago, I’d concede the Giants defense would stifle the Cowboys offense. Times have changed and the Giants defensive line is going the opposite way while the Cowboys offensive line is looking like a championship line. JPP will not be available for a few more weeks, so that helps as well. That being said, I feel good about the Cowboys ability to win most of the battles in the trenches, which in turn will open up the passing game.

Cowboys Defensive line vs Giants Offensive line
Eli Manning turned the ball over with a mixbag of INTs/fumbles and I’m not so sure they have shored up the offensive line enough to give Eli a clean pocket this season. Conversely, the Cowboys knew they needed to fix their lack of a pass rush and they have improved this significantly this offseason. The Giants won’t need to worry about Greg Hardy as he’ll be serving his 4-game suspension; however, the Cowboys have 2nd year player Demarcus Lawrence who has had a very nice camp and preseason. The addition of Randy Gregory will be another weapon for Rod Marinelli. In the middle of that d-line, the Cowboys are expecting big things from Tyrone Crawford who will be bringing it more in his contract year. I think what Giants fans will notice from the Cowboys this year will be the constant pass rush and fresh legs. The Cowboys have legitimate depth that will bring pressure on any given down this year.

Cole Beasley/Jason Witten vs Giants secondary
The Cowboys will be putting a lot of pressure on this Giants secondary with Dez Bryant commanding double teams, and Terrance Williams. Additionally, the Cowboys have Cole Beasley who has become a nuisance for defenders. Beasley should have some nice catches in this game. And let’s not forget the crafty vet Jason Witten, he is still Romo’s escape valve, and I like Witten’s match ups against the Giants linebackers and safeties.

It hasn’t been that bright for season openers as the Giants have dropped the past four. This year the G-men open up against Dallas in Jerry World and will play the role of the underdog. No worries this is a comfortable role for them.

Surprising Offensive Line
It seems that the carousel of movement in the Offensive Line this preseason has come to an end. First-round pick Eric Flowers will now anchor the left tackle position a little bit earlier than Giants fans expected. Even with a juggled line last season the giant still managed to score 380 points placing them in the top third of the league in scoring. Expect quick passes and dumping the ball off at times to ease the pressure.

Odell, Randle & Shane
I can guarantee that the Cowboys defense is going to focus on Odell Beckham Jr. Opportunities for Rueben Randle will pop up with all that shifted coverage. Giants fans are anxious to see how Odell starts off his second. One more 90 yard game from Odell would only add to the history of this heated rivalry.

Shane Vereen should put the Giants offense good motion with some key 3rd down saves. The Cowboys have their share of question marks to start the season, but still are favored by 6 points. It will be a tight game no matter what the point spread or end score reads.