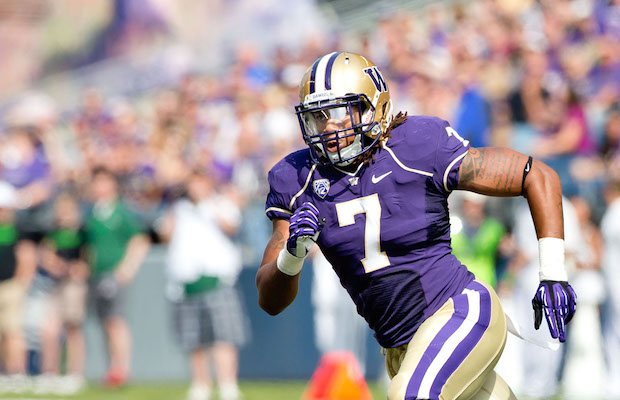 Well friends, it’s finally over. This 2014 season definitely wasn’t one to remember, but even with a 6-10 record, this Giants team showed some promise towards the end of the year. With that said, it is now officially our offseason and there are a large number of questions about this team moving forward. Having our highest draft pick since 2004 (yes, the Eli/Rivers year), there are going a lot of options at number 9 overall. I’m going to give you 5 players who I think can step in immediately and make an impact on this young Giants team.

A First Team All-American this past season, Thompson is as athletic as they get. The winner of the 2014 Paul Hornung Award, which is handed out to the nations most versatile player, Thompson just recently declared for this upcoming draft. Playing both Outside Linebacker and Running Back for the Huskies, Thompson showed what he can do on both sides of the ball. He finished his junior campaign with 81 tackles, 3 forced fumbles and 1 interception. I believe Thompson can step in and immediately impact the defense. Outside Linebacker has been a very shaky position for the Giants the past few years and it would be nice to see them change things up. Most draft experts have him going in the mid-late 1st round, but if he still there at number 9 I think without a doubt the Giants should snatch him.

More of a pass-rusher than a linebacker, Fowler had a very solid career at Florida. A Pre-season First Team All-SEC, he finished the year with only 4.5 sacks but definitely made his presence felt. With great size (6’3, 270) and a very quick first step, I think he would be a very interesting choice for the Giants. Even if Jason Pierre-Paul returns, Fowler could be a project in a lot of pass-rushing defensive schemes. He also would be excellent insurance knowing JPP’s history of injuries.

This one I might be very biased toward, because I’m a firm believer that the Safeties are the motor that makes the defense run, but Landon Collins is legit. A unanimous All-American at ‘Bama, this guy can step up in the box and make plays, and can cover all over the field. At 6’0, 220 pounds and 4.4-4.5 speed, He has the makeup to be a very solid safety in this league. We still don’t know what the Giants are going to do with Antrel Rolle, but even if they do bring him back, he turned 32 this past December which is not exactly young for a Safety. Quentin Demps did an alright job, but I think its time to start looking for some youth at that position.

Probably the most pro-ready Offensive Lineman in this years draft, Scherff possesses the skill to play both Guard and Tackle. Although it is a long-shot he falls to us at 9, it would be a no brainer if he is still on the board to pick him up. Considering the inconsistent play of our Offensive Line all year, Scherff has the potential to be a franchise Left Tackle. He has unbelievable strength but is still very quick and has a rapid first step to get to the second level on downfield blocks. Will Beatty’s time is running out, and with all the shuffling we have done recently we could get a mainstay if he does fall.

Another long shot here, but McKinney became a force on a Mississippi State team who dominated the first half of the year. He has monster size at 6’4/245, and is extremely raw and athletic. He has been clocked in the 4.5’s in the 40-yard dash, and whether he was controlling the middle or rushing the passer from the outside, he has shown the ability to consistently make plays. He is projected in the mid-20’s of the first round, but if he has a above average combine, I think his stock will rise significantly, and is someone I would love to see in Giant blue.
This years draft class is loaded with defensive talent, and although there is major work needed on the Giants offensive line, it’s well known we lost a lot of games this year due to our defense. The offense finished the year on a very promising note, and I think it’s time the Giants start looking to stack talent on the defensive side of the ball, and there is no year better to do it than this year. Go Big Blue.

9th Pick Of The 2015 NFL Draft was written by Guest blogger Brian Lazor. Please leave feedback in the comment field below, I would love to know what you think.