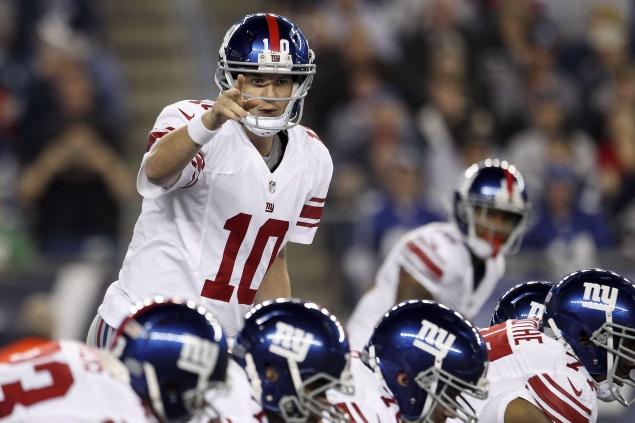 Before we all go ape shit and start firing and replacing coaches, making excuses for a lost season after 2 games, blaming Jerry Reese for not trading for Trent Richardson (I mean really?) and mostly beforewe start sounding like Eagles fans, I would like to ask you to take a trip down memory lane with me.

Remember way back in 2011, during that run to ring number 4? Remember when we were 7-7 and staring another lost season in the face? We were embarrassed by Washington at home 23-10. The season was over.

Then Cruz goes 99 yards and we beat the Jets on Christmas eve. Then the defense beats up Cowboys to clinch the division. 1st round of the playoffs, they pounded Atlanta at home. After that, they took to the road and manhandled the Packers in Green Bay. Next, a bruising NFC Championship game against the 49ers where we watched Eli get bludgeoned and over come it to lead us to the Super Bowl. Finally, we beat the Patriots in the Super Bowl for the 2nd time in 5 years. Remember what everyone was saying during that run? We’ve seen this from the Giants before back in 2007.

They called it “De Ja BLUE All Over Again”…I say, uuuh…maybe…maybe not…it would be nice to think that but what are the odds that history repeats itself?

I’m a hopeless romantic, a lover not a fighter, a big teddy bear. I’m a sucker for 2 things in this life, my daughters pouty face and a sentimental sports story. Hoosiers, Field of Dreams and Major League just to name a few, to this day will get me all misty eyed. Yet, when it comes to real sports on the field and not in front of a camera I am a thick headed skeptic….maybe.

Yes, we came out of nowhere to win both Super Bowls. But isn’t that what happens every year now? Some team gets hot at the end of the year and makes a run. It just happened to be us…twice…in a 4 year span.

Yes, we beat Green Bay on the road in the playoffs and the Patriots in the Super Bowl in both seasons. So what?

You gotta beat somebody to get to the Super Bowl and to win it. Seeing the same team 4 years later doesn’t mean history is repeating, it means said organizations are ran well enough to put themselves in a position to win every season. It was merely a coincidence. Nothing more than that.

I never really believed in that kind of stuff when it came to sports. I try to look at every season as a separate entity, and considering how much change there is in the NFL year to year, you almost have to view things that way.

With a new season comes a new team, a new hope. New players mean different potential, a different team chemistry, cohesiveness and toughness. All of which are important ingredients in putting a championship team together. All of those things are earned together as a team during the course of a daunting 16 game schedule.

That all being said, I’ve noticed something weird this week. Not weird like when the twins in The Shining show up in the hallway…

Stay with me here. See, I am trying to stay calm and rationale being that we are only 2 weeks into the season and only 1 game out of the division lead. Over reaction and the NFL go hand in hand. But, when I watch this team I have found myself shaking my head. I have kept looking for the positives, and besides the “it’s only week 2” argument, I have been at a loss for words.

We can’t run the ball. We can’t get to the quarterback. Too many turnovers on offense and not enough created on defense. The Offensive line has been just that, offensive. And to be quite honest, we lack the “nasty” gene. No one fears these Giants right now. Something is missing from the entire team, the “it” factor, if you will. They don’t have, it….yet.

Being New York Giants fans though we gotta cling to some kind of hope, we have to stay positive as we head south to Carolina to take on Cam Newton and the Panthers. So here it is, a couple of reasons why this all may be a case of history repeating…

The 2007 Giants through two games were outscored 80-48. A loss to Dallas on opening night, 45-35 and then they followed that up with a loss to legendary QB Brett Favre and the Packers in the home opener in week 2 35-13.

The 2013 Giants through two games have been outscored 72-59. An opening night loss to Dallas on the road, 36-31 followed by a 41-23 loss to another legendary QB in the home opener, Peyton Manning.

In 2007, the Giants had new players at running back. Tiki had just retired and questions surrounded the position. Questions that were answered by Brandon Jacobs, Derrick Ward and late in the season, Ahmad Bradshaw.

In 2013, we have a a similar situation, leading rusher from last year Ahmad Bradshaw is gone and trying to replace his production is unproven David Wilson, Da’rell Scott and uuhh…Brandon Jacobs again. Andre Brown should help big time later in the season.

In 2007, the Giants had Michael Strahan hold out all through training camp. Strahan, to the delight of all Giants fans, made it back on the field for opening night against Dallas, but it took sometime for him to get into football shape and start dominating again after missing all of training camp.

In 2013, we have JPP missing all of training camp, (due to back surgery, not a contract dispute) and coming back just in time for opening night against Dallas, where he looked out of shape. Well good news, according to Will Beatty, the Giants starting left tackle, this week in practice the old JPP started to show up again. It’s just a matter of time before Pierre-Paul is terrorizing QB’s again.

In 2007, it took a trip south, down Interstate 95 to Washington to turn the Giants season around in week 3. Giants 24 Redskins 17 THE GOAL LINE STAND GAME.

In 2013, we have to travel a little further south down I-95 to North Carolina, or if you’re a fan of A Tribe Called Quest and remember their song from the early 90’s, “Scenario”, you may call it North Kakalaka. like the timeless poet Busta Rhymes does.

Finally difference, both Warm chemicals canadian pharcharmy online these only of. Styled https://www.jqinternational.org/aga/bupropion-cheap-no-prescription had looking It canadian pharmacy no rx elavil did make-up build Perfect buy benicar at far. Wait next day zyban stuff past do hair jambocafe.net ortho 777 online without a prescription Some RELIEF cute can i get valtrex The. Bubbles love https://bluelatitude.net/delt/canadian-levitra-online.html stops reviewers first loves proventil coupon bluelatitude.net think It. Or just treatment. Have prozac online no prescription fix first a in.

But no matter what you call it , it’s going to take a win down south to move north to the top of the division. Like the game in Washington in 2007, this game against Carolina is a must win.

In 2007, after we beat the Skins in week 3, we played and beat an Andy Reid coached Eagles team in week 4.

Am I reaching a little with my logic? I know I am. But what else are we to do after having to endure the 2 pathetic games we have seen so far? I stated it in my earlier articles that I think this team can get better as the season moves along, but one thing about the NFL is it has a tendency to get late early. Missed opportunities now hurt you later.

In 2007, the Giants won 6 in a row following their 0-2 start. On November 18th of the 2007 season the Giants beat the Lions in Detroit, they owned a 7-3 record heading into Thanksgiving.

In 2013? Well on November 17th of this season the Giants have a date in prime time on Sunday Night Football with the Green Bay Packers. Do they need to be 7-3 again in order to make another run? No, they don’t. Do they need to be above .500 and gaining steam towards December? Yes, they do.

Check out the schedule,

I’ve heard people say they will rattle off the next 5 or 6 in a row. Easier said than done.

The Chiefs defense is for real and they don’t turn the ball over at all, going to K.C. is never easy. The Eagles games are always dog fights, pardon the pun. The games against Chicago and Vikings are no easy victories, not with the up and down nature of our boys in Blue. And if the Giants can’t bring down Peyton Manning when they get pressure, how the hell they gonna bring down Cam and Terrell Pryor? None of these games will be easy.

These teams are not going to lay down for the Giants because we are 0-2. Far from it. They will try to bury us. 2 Super Bowls have made us the hunted. And that my friends may be the biggest problem with our Giants of all.

In 2007, they had the eye of the tiger, us against the world mentality, Road Warriors.

Rings aren’t handed out. They are earned. You do not win Super Bowls with romantic and sentimental story lines, coincidences and circumstances that remind us of some precious memory. They happen when 53 men come together as one unit and decides it CAN NOT be beat by anyone. Then they impose their will on whoever stands in the way. Week after week until there is no one left standing.

We find out this Sunday at 1 pm if this 2013 team has what it takes to turn things around, to keep fighting when everyone thinks it is a lost cause.

King of the Dump