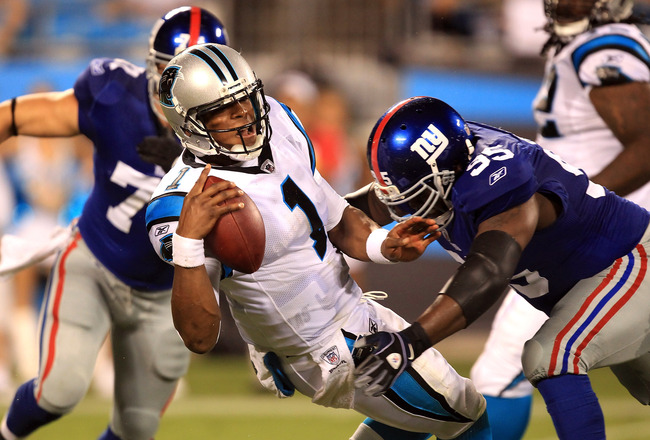 Where do you go from here? The GMen are in an 0-2 hole and are facing a long climb out of it. Luckily, the rest of the NFC East is also in the trash, so it’s a battle to be King of the Dump. The Giants are facing their first, of what will be many this season, mobile quarterback. Cam Newton came into the

league as a tidal wave of force, racking up the most rushing and passing yards for a rookie QB. He definitely faced a sophomore slump, getting completely enveloped by defenses and he struggled making moves until late in the season. Giants haven’t had any pressure

on D and have racked up less than a handful of sacks. If they want to stop the Panthers’ offense, they have to stop Cam. Eli has looked less than spectacular in his first two games. I kinda looked away in the first game because one of his picks was a tip drill and another could almost be fully blamed on a lazy receiver. Then he comes back and overthrows a couple balls, has another tip drill and looks anything but sharp. He had 15 picks all of last season and already has 7 in two games. As goes Eli and the defense, so goes the Giants. It’s tough to put all of the blame

on Eli when the Giants’ run game is so pathetic. Jacobs isn’t in full form yet, who knows if he will ever be, and Wilson is running scared. If you can’t ground and pound, you can’t open up the receiving routes. Another note, Corey Webster is looking like a scratch for today, which will put even more strain on an extremely weak Giants secondary. In third and long situations last week, Peyton made getting a first down look uncomfortably easy. Luckily, there’s not much further the Giants can sink, so let’s hope there’s only up from here.

There’s not much I can say about the Panthers. Cam Newton is dangerous, a defense lead by former BC great Luke Kuechly is somewhat formidable, but they do have weakness in the secondary just like the Giants. If there was ever a chance at a bounce back game this is it for Big Blue. Eli can pick these guys apart and should do so. The only question is, will the Giants D let the same happen to them? A repeat performance of 3 picks and only a couple dozen yards on the ground from Cam would be greatly appreciated today. As always, Let’s Go Giants!!!