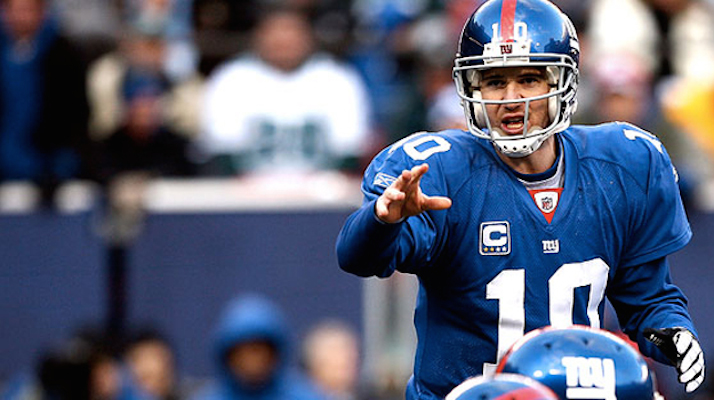 Is he still an elite quarterback? Was he ever elite? Is his time running out as the Giants’ franchise quarterback? Will he receive a contract extension in the future and make him a lifetime Giant? Of course, all of these questions regard veteran QB Eli Manning. As the regular season opener rapidly approaches, several questions remain about Eli. His play this season will answer most, if not all, of these Eli Manning expectations and inquiries. But, how will they be answered? What can Giants’ fans expect in 2014?

Reasons for Optimism:
New Offensive Scheme– For the first ten years of Manning’s career, Kevin Gilbride was the Offensive Coordinator. His deep throw, option route-oriented scheme has caused Manning’s completion percentage to decline every year since 2010. His average distance traveled per pass attempt was highest in the league last year with almost 10 yards per pass. Continuous downfield throws cause more third-and-long situations and lack of offensive continuity. But, out with the old and in with the new. Gilbride retired during the offseason and was swiftly replaced with Ben McAdoo. Formerly the Quarterbacks and Tight End’s Coach in Green Bay, McAdoo brings with him a quick-hitting, fast-paced offense that better suits both Manning and his receivers, especially Reuben Randle, who struggled to grasp Gilbride’s system and at times last season caused interceptions with his miscommunication with Manning. This new offense should revitalize Eli, allowing for a drastically higher completion percentage and decreasing his sack total and interceptions thrown.

Revamped Offensive Line– Last season, the Giants’ offensive line was subpar, to put it lightly. Manning consistently faced pressure with no time to go through his progressions. This prompted the front office to make it a priority to fix the broken line during the offseason. There will definitely be at least three new starters on the line this year, if not more. The Giants went out and signed guard Geoff Schwartz, center JD Walton, versatile veterans John Jerry and Charles Brown, and drafted multitalented lineman Weston Richburg in the 2nd round. Also, Justin Pugh continues to improve and Brandon Mosley has opened eyes at right guard with his development. The offensive line will look very different than last year’s underperforming line of Beatty, Boothe, Baas, Snee, and Pugh, which is likely for the best for Eli and the offense.

Refurbished Backfield– The Giants have always prided themselves on a strong run game, but last year that was not the case. They finished 4th worst in the NFL in rushing yards and 2nd worst in fumbles. Along with rampant injuries that forced the Giants to sign veteran Brandon Jacobs off of the scrap heap, change was necessary. They let injury prone Andre Brown walk and signed free agent Rashad Jennings. Jennings, along with good ball control and power, gives the Giants an immediate boost in pass-protection and receiving. They also drafted Andre Williams in the 4th round. Williams has turned heads and is rapidly earning more and more touches. Manning has always excelled in play action, and with the new tools at runningback, he should thrive. A good ground game always facilitates the passing game, and if the Giants can improve on the ground, Manning will undoubtedly improve.

OBJ– The Giants drafted speedy receiver Odell Beckham Jr. in the 1st round with hopes that he can give the offense a big play threat on the outside. If he can stay healthy and return to the practice field, he will immediately help the offense, and Eli, return to shape. Also, the presence of OBJ will allow Victor Cruz to move back into the slot, a position in which he has dominated in the past. With Cruz in the slot, Manning’s completion percentage should drastically improve. Also, with OBJ and Reuben Randle on the outside, Eli could have several weapons at his disposal that he did not have last season.

Reasons for Pessimism:
Age- At 33 years old, Manning is the 5th oldest starting quarterback in the NFL. At this age, most quarterbacks are on the decline in their careers. Manning’s numbers have dwindled every year since 2011 as well as increased turnovers each year since. Also, he experienced his worst season as a pro last season. In the final game, Manning suffered a very serious ankle injury that required surgery. Although he has fully recovered from the injury, he has never missed a game in his career and has never experienced a serious injury like this before. At 33, high ankle sprains could potentially have lingering effects, which is something to keep an eye on.

New Offense– Although Ben McAdoo’s new quick-hitting system better fits Manning’s playing style, it is the first time in his entire career he has had to learn a new offense. In the first two preseason games, he has apparently struggled to grasp the new scheme. It is imperative that Manning masters the offense if he is to rebound from his worst season as a pro.

Lack of Established Tight Ends– Ben McAdoo’s offense counts on a vertical threat tight end that can stretch the defense. Jermichael Finley provided this role in Green Bay for the past five seasons where McAdoo was Quarterbacks Coach last season, and was Tight Ends Coach from 2006-2011. The Giants, however, do not have any established talent at this position. Larry Donnell was listed as the starting tight end on the preseason depth chart, but this is obviously subject to change. Along with Donnell, the Giants have Adrien Robinson, Daniel Fells, Kellen Davis, Xavier Grimble(r), and Jermaine Cunningham(r), on their current roster. With two undrafted free agents, two young and inexperienced tight ends (Donnell and Robinson), and two veterans (Fells and Davis), neither of whom have ever had more than 400 receiving yards in any season, Manning will need one or more of these players to step up in order to bounce back.

It will be incredibly hard to bounce back from the worst season of his career, but if the offensive line can improve and stay healthy, if Manning can fully grasp OC McAdoo’s system, if the Giants can establish a legitimate ground game, and get production from the TE spot, Manning should have a substantially better season and return to his 2011 form, if not exceed it. If there is one quarterback who can comeback from such a devastating and disappointing season, it is Eli.